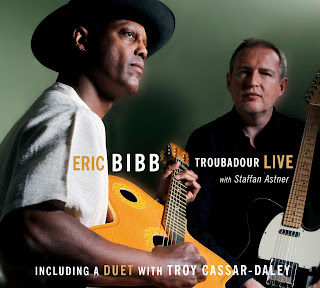 For four decades, singer-songwriter-guitarist Eric Bibb has criss-crossed the globe, captivating live audiences by bearing witness to the infinite complexities of the human experience – both the mundane and the spiritual – with music that’s steeped in the tradition of American blues and layered with generous shades of folk and gospel. He is, in every respect, a modern-day troubadour – heir to the legacy of Lead Belly, Woody Guthrie, Odetta and countless other great voices of the early and mid-20th century.

Bibb’s recording, Troubadour Live, captures one of those powerful live performances in an intimate but emotionally charged setting. Recorded in December 2010 at Katalin and All That Jazz in Uppsala, Sweden (about 50 miles north of Stockholm).

“After many ambitious studio albums, I really wanted to document and share with a wider audience what I’d been doing live on stage,” says Bibb. “Given my intensive touring schedule over the past couple years, there was a window of opportunity to involve some fine musicians whom I really love working with live as well as in the studio, and it all seemed to come together around this gig.”

Among these “fine musicians” is Swedish guitarist Staffan Astner, who has recorded and/or performed with a list of artists from every corner of the world and every style imaginable. Some of Astner’s past collaborators include Ray Charles, Ian Hunter, Celine Dion, Kim Richey, Roxette and many others.

Also on hand are Glen Scott, Andre De Lange and Paris Renita, the gospel trio collectively known as Psalm4. Over the years, Bibb has worked with all three vocalists individually and as a group on previous recordings and stage performances. “Knowing how well we’ve worked together in the past, I asked them to join me for a few of the tunes in this performance,” says Bibb. “It was a nice way to reconnect with some old friends.”
Troubadour Live opens with “The Cape,” a quiet and nostalgic ode to the value of childlike courage – at any age – in the face of the unknown. Astner steps in immediately after to lend a few tasty licks to the rousing “New Home,” a mix of country blues and churning gospel.

Further into the set, the easygoing “Shavin’ Talk” celebrates the simple pleasures of life, while “Tell Riley” pays tribute to blues giant B.B. King. “Staffan’s a huge B.B. King fan, and he was really able to get into that zone and play stuff that’s reminiscent of B.B. I found that to be really exciting.”

The spiritual and melodic “Connected” includes understated accents from Astner and a subtle piano interlude by Glen Scott, but “the crowning glory of that song is when Andre De Lange begins to sing in Zulu at the end of the song,” says Bibb. “Something really came together there. The song seemed to be a really good canvas for something special and spontaneous to happen, and we actually lived the theme of the song. We really connected.”

Paris Renita takes the stage and joins her Psalm4 colleagues for the stirring “New World Comin’ Through,” an often dark but ultimately optimistic view of a better future. Bibb says, “I think something powerful happens on this song, with beautiful vocals from Psalm4 and some great slide guitar from Staffan.”

In addition to the live material, Troubadour Live also includes two bonus tracks crafted in the studio. “Put Your Love First” is a country-flavored vocal duet that Bibb co-wrote and recorded with Australian singer-songwriter and multi-instrumentalist Troy Cassar-Daley. “If You Were Not My Woman,” meanwhile, is a straight-up reggae track with a simple backbeat and heartfelt, devotional lyrics.

“A live record is a way to give people a sense of the way an artist communicates with his or her audience,” says Bibb. “I think this record does that. It’s intimate, and that’s a big part of what I like to do.I play in front of larger crowds sometimes, but I think my forte is being able to get close to an audience on a given evening and deliver a message that they can take with them after they leave. I think Troubadour Live captures that moment of connection.”
Posted by Jazz Chill at 9:57 AM