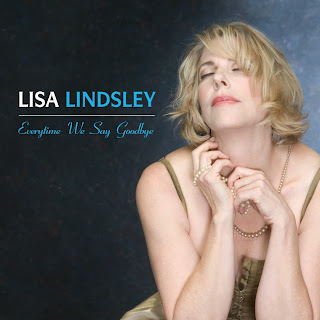 Lisa Lindsley's 2011 debut recording, Everytime We Say Goodbye, introduced jazz audiences to, as critic Ken Franckling described her, "a Bay Area singer we need to keep an eye on -- and ears wide open for years to come."

Lindsley is now preparing to make her New York debut -- at the Metropolitan Room on Wednesday, March 28 -- and has put together a new show, "I've Got a Lot of Livin' to Do," which also features her frequent musical colleague George Mesterhazy.

Mesterhazy, a premier accompanist for singers (from Shirley Horn during the last several years of her life to, more recently, Paula West, Mark Murphy, and Rebecca Parris), offered impeccable support on Lindsley's CD as pianist and arranger. "George has been a great support and mentor in guiding me with music, and making me realize I can go for my dream," says Lisa. "Performing in New York with George is another big step on my dream ladder!"

Recorded during the breakup of her marriage, Everytime We Say Goodbye reflects the currents of longing, melancholy, and fortitude running through her life at that time. In concert, Lisa brings vivacious energy to the stage, with a repertoire reflecting her resilience and rekindled exuberance. Lindsley may be a latecomer to jazz singing, but she has deep experience as an actress and possesses a natural flair for comedy. "I've Got a Lot of Livin' to Do" is a lively, persuasive showcase for all her gifts as a storyteller and a performer of the first order.

Lisa Lindsley was born and raised in Ogden, Utah, the daughter of a jazz-loving father and a former film actress mother who'd left Hollywood because of the McCarthy-era blacklist. By high school Lisa had discovered musical theater, a passion that carried through to college. She attended the prestigious California Institute for the Arts (CalArts) theater program, then spent a decade touring and performing with The Imagination Company.

Raising and homeschooling three daughters put her performing ambitions on the backburner for a long time, but in recent years she developed a successful career as a voice-over artist and, inspired by her daughters' own involvement in musical theater, she took the plunge into singing. The Bay Area's rich pool of jazz education has proven invaluable -- from her classes at Contra Costa College with award-winning vocal group instructor Roger Letson, to her on-the-job training with veteran pianist/drummer Kelly Park, to her studies at Berkeley's Jazzschool Institute, where she is enrolled in the demanding jazz studies degree program. Lindsley regularly appears on Bay Area stages, and also tours throughout California.