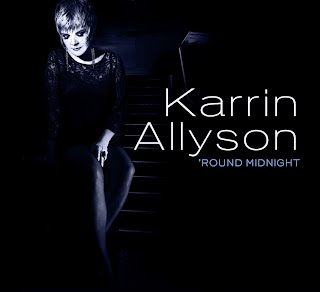 Karrin Allyson’s album, ‘Round Midnight is an 11 track collection that was recorded at Sear Sound in New York City. The tracks on ’Round Midnight come from a wide variety of sources, including Bill Evans, Paul Simon, Duke Ellington, Johnny Mandel, Thelonious Monk, Stephen Sondheim, even Charlie Chaplin. But regardless of who wrote the songs and when, Allyson ties them all together with the same melancholy thread with which they were originally spun.
The three time GRAMMY nominated vocalist describes her new album best in her liner notes: “Imagine yourself, in the city, walking late at night,” she writes. “It’s ‘Round Midnight. The wind is cold, but you hear some warm sounds and you follow your ear down into a small, dark club. There’s a woman at the piano singing these intimate ballads – one after the other. Maybe you’ve just recently suffered a heartache, or maybe the lyrics, melodies and harmonies evoke feelings you have somewhere deep down inside.”
The set opens with Bill Evans’s “Turn Out the Stars,” a song whose poignant lyrics by Gene Lees are made even more heartbreaking by Allyson’s decision to slow down the tempo and stretch the time at certain points along the way. The followup track is a quiet reading of Paul Simon’s “April Come She Will” that examines the human heart through the prism of changing seasons. “Whenever nature is referenced with life and love, I feel even more connected with it all,”

Further in, Allyson delivers a wistful rendition of “Spring Can Really Hang You Up the Most,” the bittersweet standard by Fran Landesman and Tommy Wolf, based on the classic T.S. Eliot line: “April is the cruelest month…” “I’ve sung this song for years and always wrestled with its long form and many lyrics,” says Allyson. “I wanted to make it swing, yet still have it convey the sadness of the story that’s told in the lyrics.” Allyson closes with the title track, Monk’s iconic composition that puts the final touch on the jazz club vibe that has taken shape amid the preceding ten tracks.

This album marks the first time in 13 records that Allyson plays all the keyboard parts — piano and Rhodes. “In a way, I'm just returning to my roots. I’ve been playing keyboards more and more in my live shows for the last three years, and it just seemed like the natural thing to do on this album. The shape and emotional feel of 'Smile' and 'I'm Always Chasing Rainbows' grew directly from my piano playing." In 'Round Midnight Allyson is joined by her long time partner, guitarist Rod Fleeman, with Bob Sheppard on woodwinds, harmonicist Randy Weinstein, bassist Ed Howard, whose previous associations include balladeer Shirley Horn, and drummer Matt Wilson.

In the end, telling the story is what it’s all about – even if the story is about heartbreak. Sometimes the best way to do it is to draw people into a quiet space in the late hours ‘Round Midnight – a time and place where their guard is down and they’re open to music that speaks the language of the heart.

“What I’m most interested in doing on this record – and on all my records – is reaching people and communicating with them,” says Allyson. “That’s the thing that inspires me more than anything else.”

Karrin Allyson - 'Round Midnight Track Listing:
1) Turn Out the Stars
2) April Come She Will
3) Goodbye
4) I'm Always Chasing Rainbows
5) Spring Can Really Hang You Up the Most
6) Smile
7) Sophisticated Lady
8) There's No Such Thing As Love
9) The Shadow of Your Smile
10) Send In the Clowns
11) ’Round Midnight
Posted by Jazz Chill at 10:01 AM