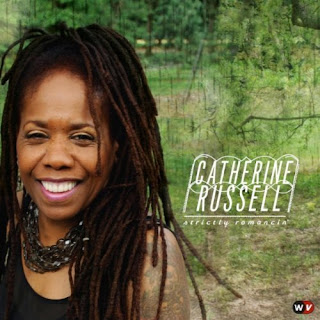 Strictly Romancin' is a paean to natural attractions; to a lover, an art form, and to one’s family heritage. On the album, Catherine explores love’s foibles, failures, and bliss, from amorous to humorous, embodying the lost art of song savvy, inhabiting the lyric, and allowing each melody to shine. On this 14 song collection, this ever soulful vocalist takes us on a journey; from Harlem dance hall, to Parisian Café, to Store Front Church, to New Orleans Gin Joint, to Uptown Cabaret, blurring distinctions between the carnal and the eternal, in a musical tour de force.

The album opens with “Under The Spell of The Blues”; a newly minted version borrowed from the original Chick Webb / Ella Fitzgerald recording. Alone with heartache at the dawn, Catherine sets a mournful tone with her mesmerizing lament.

The classic Dorothy Fields – Jimmy McHugh composition, “I’m In The Mood For Love”, was plucked from the fruitful recording collaboration of Louis Armstrong and Luis Russell. “Everything’s Been Done Before”, from the same source, is an unusual melody. Both are impeccably rendered by Catherine’s lush croon. “Ev’ntide” comes from the same rich period in 1936 when Louis Armstrong was churning out masterpieces for the Decca label, this one written by Hoagy Carmichael, and rarely recorded since. This sunset stroll with that special someone now belongs to Catherine. The sensuous slow dance of “Romance In The Dark”, written by the great Lil Green, dazzles the senses.

“Satchel Mouth Baby” is a fun and bouncy infatuation written by Mary Lou Williams (a nod to Louis Armstrong). Catherine first performed this at the Kennedy Center’s Women in Jazz Festival in 2010, and it’s highlighted her repertoire ever since; fitting, as Cat’s mom worked with Mary Lou Williams and her dad with Satchel Mouth.

Cat implores “Don’t Leave Me”, a tune written and first performed by blues singer/pianist Ivory Joe Hunter, whose signature style is expertly channeled by pianist Mark Shane. “I Haven’t Changed A Thing”, once recorded by the hit-maker Kay Starr for Capitol Records, and mysteriously unissued, allows Catherine to reassert loyalty and devotion, while unearthing another gem.

And who better than Catherine Russell to jump start the spirit of Swing Era giants like Cab Calloway (“Wake Up and Live”), and Henry “Red” Allen (Whatchya Gonna Do When There Ain’t No Swing?”), and bring them into the 21st Century with utterly contemporary flair!