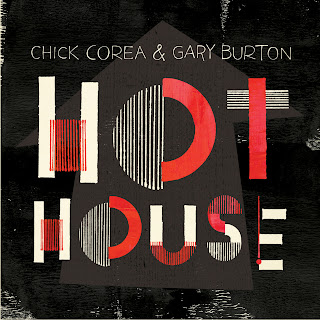 Pianist Chick Corea and vibraphonist Gary Burton became a collaborative team almost by accident. Their first musical encounter took place at a jazz festival in Germany in 1972, when they performed together in a spur-of-the-moment encore. The results were so satisfying – not only to the audience but to the artists themselves – that the two musicians reconvened in a recording studio a couple months later to record the intricate yet highly melodic Crystal Silence, their first of several collaborative studio projects.

The impromptu encounter in Germany marked the beginning of a musical partnership that has lasted for four decades – not only on the performance stage but also over the course of seven recordings. Despite the years that have come and gone since that fateful European gig, the duo of Corea and Burton have not lost their ability to generate their unique brand of what could best be described as cool heat.

This highly creative and prolific team celebrates forty years of great jazz with the September 4, 2012, release of Hot House on Concord Jazz, a division of Concord Music Group.

“Though we often go for months at a time between duet tours while we are playing music on our own,’ Burton says, “within about ten minutes of getting together again, the old communication snaps back into place. I can guess what Chick is going to play next from two blocks away, and he is the same with me. Certainly, the principal reason we have continued to work together all this time is because we have this natural reaction.”

That “natural reaction” is alive and well on Hot House, a collection of ten songs that draws from the work of some of their favorite composers from the 1940s through the 1960s. “After exploring several genres of jazz and standards, we eventually settled on eight composers, most from the jazz world,” says Burton. “But we chose songs that are generally not that well known; the composers’ names are probably more familiar than the songs to most listeners. The final result feels very fresh and different to us.”

Although the source material is indeed eclectic, the set as a whole is seamless and undeniably rich. It starts with the lighthearted “Can’t We Be Friends,” what Burton calls “a rather obscure standard first recorded by Art Tatum,” a piano hero to both Burton and Corea. The track intentionally maintains some of Tatum’s flourishes and stride swing feel. The duo then makes the unlikely shift from Tatum to Paul McCartney’s decidedly darker “Eleanor Rigby,” a cover that adds a sense of uptempo urgency to the original song’s poignancy.

The lush and melodic “Chega de Saudade” is the first of two Antonio Carlos Jobim tunes, and one that both artists learned during their respective stints with Stan Getz in the 1960s. They return to the Jobim catalog later in the set with the equally ornate “Once I Loved.”

Other noteworthy offerings include a mercurial rendition of Bill Evans’ “Time Remembered” and a playful reading of “Strange Meadow Lark,” a lesser known selection from Dave Brubeck’s iconic 1959 recording, Time Out.

The energetic title track is a tune by pianist Tadd Dameron, based on the harmony progression of Cole Porter’s “What Is This Thing Called Love?” Burton explains that he and Corea “got confused about who was going to solo first after the melody, and we both started soloing at the same time, but it seemed to work really well, so we kept it as part of the arrangement.”

Hot House also includes Thelonious Monk’s brief and little known “Light Blue,” to which Corea adds a second chorus that stays very much in the spirit of Monk.

The set closes with Corea’s own “Mozart Goes Dancing,” an intricate and engaging piece recorded with the Harlem String Quartet. The track was originally slated for the duo’s next project – a reprise of their touring and studio work in the ‘80s with string quartet and newly penned music from Corea – but “the result was so spectacular that we decided to add it to the CD,” says Burton, “as a preview of what we’ll be doing with our duo next year.”

After four decades of collaboration, the Corea-Burton team continues to look forward to the next big idea. “Throughout our 40 years of making music together, there has never been a downside with our duet,” says Corea. “Each concert and recording we have done has always been a great pleasure and a personal inspiration. This new set of duet music is no exception. Until this recording, we never focused on ‘standards’ with our duet, but it was natural to do as these songs are from the era we grew up in.”

Burton adds: “I used to think that someday we would run out of ideas and get bored with our duet. When we crossed the 20-year mark, I wondered if we might come to the end sometime soon. But at the 30-year mark, I began to think it might last, after all. And now after four decades, we are as excited as ever about the music we’re playing and how much fun we have on stage every night.”
Posted by Jazz Chill at 4:20 PM