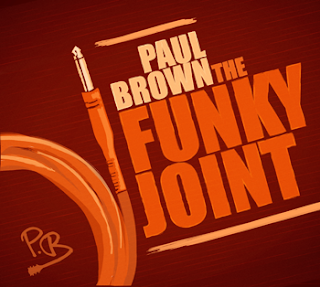 Woodward Avenue Records is preparing for the release of The Funky Joint from double Grammy winner and guitarist, Paul Brown. The album is due to be released on Woodward on March 6, 2012. Paul Brown also serves as producer on his new album, which includes appearances by Boney James, Euge Groove, Bob James, Bob Baldwin, Marco Basci and “The Producers” tour-mate, Darren Rahn. “This album allows Paul to unleash his musical roots and just let it rip” says Mark Nordman, President and CEO of Woodward Avenue Records, “while at the same time being true to the sound that has earned him over 50 # 1 Hits.”

“Paul Brown sets the musical standard by which others are measured. The Funky Joint showcases Paul’s incredible guitar playing as well as his signature sound, as both an artist and a producer. We are extremely excited about this album and look forward to its release. Making really great music requires a commonality of vision and purpose between the artists and the label…….and we are confident that our association with Paul will be very positive and beneficial to all whom we work with. Woodward Avenue Records is trailblazing a new direction for Jazz, R&B and Soul by fusing music and artists from different genres into a fresh and unique sound…..the signature sound of Woodward Avenue Records and the great Paul Brown.”