SOUNDTRACK FOR A REVOLUTION 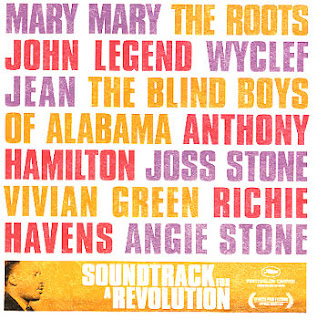 The soundtrack to Soundtrack For A Revolution – a film that chronicles the sounds of the Civil Rights era, features new recordings by a diverse, reverent roster of artists that ably demonstrate how deeply these songs continue to resonate. Soundtrack For A Revolution tells the story of the American civil rights movement through its powerful music - the freedom songs protesters sang on picket lines, in mass meetings, in paddy wagons, and in jail cells as they fought for justice and equality. The film features new performances of the freedom songs by top artists, including John Legend, Joss Stone, Wyclef Jean, and The Roots; riveting archival footage; and interviews with civil rights foot soldiers and leaders, including Congressman John Lewis, Harry Belafonte, Julian Bond, and Ambassador Andrew Young. The freedom songs evolved from slave chants, from the labor movement, and especially from the black church. The music enabled blacks to sing words they could not say, and it was crucial in helping the protesters as they faced down brutal aggression with dignity and non-violence. The infectious energy of the songs swept people up and empowered them to fight for their rights.
The soundtrack inncludes legendary spiritual soul and folk songs by Angie Stone, The Roots, Vivian Green, Anthony Hamilton with The Blind Boys Of Alabama, Mary Mary, John Legend and Joss Stone and Wyclef Jean. Each brings earnest passion to the performances, many in a fairly raw and urgent mode. Includes "We Shall Not Be Moved" by Mary Mary, "Here's To The State Of Mississippi" by Wyclef, "Will The Circle Be Unbroken" by Richie Havens, "Wade In The Water" by Angie Stone. "Oh Freedom" by Vivian Green, "Ain't Gonna Let Nobody Turn Me Around" by The Roots and more.
Soundtrack For A Revolution features musical performances by:
Anthony Hamilton and the Blind Boys of Alabama
Angie Stone
Joss Stone
Vivian Green
The Carlton Reese Memorial Unity Choir
Mary Mary
Wyclef Jean
Richie Havens
The Roots
John Legend
Posted by Jazz Chill at 12:06 PM