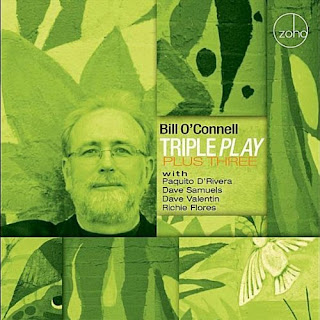 Bill O'Connell's colorful career is notable for his extensive accomplishments in both Latin music and modern jazz, from serving as Mongo Santamaria's pianist in the 1970s over his long association with flutist Dave Valentín to working with Chet Baker, Sonny Rollins, Gao Barbieri, and the fabled Fort Apache Band, followed by a stellar career as a band leader and solo artist since the 1990s.

"A lot happens at the moment," the leader adds, "and that's the beauty of just having three people. Because there's no bass player, sometimes I'm playing the tumbao (the basic rhythm played on the conga and the bass in Afro-Caribbean music) with my left hand and sometimes I just leave it alone. This really allows me to direct the harmony or re-harmonize any way I want without having clashes with a bassist. I feel that this format has opened up a different way for me to play."

Dave Valentin made his recording debut with Ricardo Marrero's group and he appeared also on a Noel Pointer album. Discovered by Dave Grusin and Larry Rosen, Valentin was the first artist signed to GRP and he has been a popular attraction ever since. Valentin has recorded over 15 albums, combining the influence of pop, R&B, and Brazilian music with Latin and smooth jazz to create a slick and accessible form of crossover jazz. In 2000, he appeared in the documentary film, Calle 54, performing with Tito Puente. He toured with El Negro and MioSotis. Since the mid-2000s, Valentin has been signed to Highnote Records releasing World On A String (2005) and Come Fly With Me (2006). He has done several collaborations with pianist Bill O'Connell and was a nominee for the Latin Grammy Awards in 2006 and, for Pure Imagination, in 2011.

Typically, a Latin jazz group led by its percussionist would mean one thing: explosive Afro-Cuban rhythms in a boisterous, celebratory atmosphere. But the boundaries of the music have been expanding exponentially in recent years, and 34-year-old Arturo Stable is a prime example of how the influence of his native Cuba is being woven into a far more colorful tapestry than ever before. Stable's musicianship is subtle and textured, and his compositions possess an elegant romanticism culled from classical music.