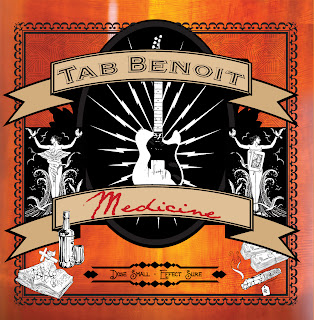 Medicine, Benoit’s seventh solo release on Telarc International, a division of Concord Music Group, successfully joins two gifted guitarists/songwriters in a session that proves greater than the sum of its very talented parts. This 11-track recording features seven new Benoit originals co-written with ace songwriter Anders Osborne (his song “Watch the Wind Blow By” was recorded by Tim McGraw in 2002, hitting No. 1 on the country charts for two weeks and selling over three million albums, and Keb’ Mo’s 1999 GRAMMY-winning album Slow Down, featured two songs he had co-written).


“Anders and I have been friends for years, and we have a very comfortable relationship,” says Benoit, a GRAMMY®-nominated songwriter, as well as a guitarist and singer with a repertoire that ranges from swamp-pop classics to gritty blues and rootsy jams. “Songwriting needs to feel natural. It needs to flow easily. When he and I went out on the bayou, we came back with seven songs! Anders also played most of the rhythm parts on the album. He does a good job of not stepping on what I’m doing and making it fit the song.”

In an unusual twist, Osborne (who also co-produced the album) uses B.B. King’s famous guitar “Lucille” on Medicine. “He played half the album on that guitar, basically anything that’s not slide guitar,” Benoit says.

Medicine was recorded at Louisiana’s legendary Dockside Studio (B.B. King, Dr. John, Keb’ Mo’, Taj Mahal, Buckwheat Zydeco), located on a 12 acre estate in the heart of Cajun country on the banks of the Vermilion Bayou, and engineered by David Z (Prince, Jonny Lang, Buddy Guy, Gov’t Mule). The award-winning music producer/engineer worked with Benoit on three earlier releases (Fever for the Bayou, Power of the Pontchartrain and Night Train to Nashville). “When David’s in the booth, I don’t have to worry,” says Benoit. “He’s always comfortable with the way I work. We have a lot of fun and like to joke around.”

Benoit’s blazing guitar kicks off the title track of the recording. “‘Medicine’ captures what this album is all about,” he says. “Let music be the medicine. Like John Lee Hooker once said, ‘Blues is the healer.’”

“Sunrise” showcases Benoit’s keen sense of tasteful restraint when it comes to the slower blues numbers, and “A Whole Lotta Soul” spotlights Ivan Neville on B-3, alongside Benoit’s crunchy fretwork and vocals.

“Long Lonely Bayou” is a special highlight. This roots summit features two of Louisiana’s biggest and most popular artists: Michael Doucet and Tab Benoit. “Michael and I have played several gigs together over the years,” Benoit says. “When I wrote this song, I could practically hear him performing it. Most Cajun music is played in a major chord, but Michael approached it as crying, minor type of song.”

“In It To Win It” and “Next To Me” both spotlight Benoit’s unbelievably solid guitar chops, while “Nothing Takes The Place of You” is a deep, soulful ballad drenched in his whiskey-soaked vocals. Doucet returns to play fiddle and sing on “Can’t You See” and the album’s funky closer, “Mudboat Melissa.”

Tab Benoit is Louisiana’s No. 1 roots export. More than just an acclaimed bluesman, he is an indefatigable conservation advocate. Benoit is a driving force behind Voice of the Wetlands, an organization working to save Louisiana’s wetlands. In 2010, he received the Governor’s Award for Conservationist of the Year from the Louisiana Wildlife Federation. Benoit also starred in the iMax motion picture Hurricane on the Bayou, a documentary of Hurricane Katrina’s effects and a call to restore the wetlands.

In 2007, Benoit won the dual awards of B.B. King Entertainer of the Year and Best Contemporary Male Performer at the Blues Music Awards in Memphis (formerly the W.C. Handy Awards). In 2006, he received a GRAMMY nomination for Best Traditional Blues Album for Brother to the Blues, a collaboration with Louisiana's LeRoux. LeRoux joined Benoit on Power of the Pontchartrain in 2007 and the live Night Train to Nashville in 2008.

Medicine is more than another strong entry in Benoit’s increasingly impressive discography – it’s one of his most defining albums. “Magic happens when you least expect it,” says Benoit. “Most of the stuff here was played live – these are mostly first takes. When it came down to playing, we weren’t trying to structure things. We were open to the moment.”
Posted by Jazz Chill at 4:15 PM