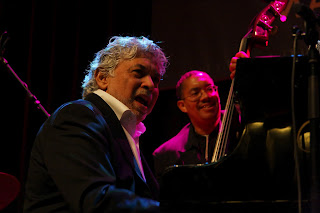 In a career spanning five decades, pianist Monty Alexander has distinctively bridged the worlds of jazz, popular song, and the music of his native Jamaica. With over 70 albums to his name, Alexander is celebrating his 50th year in music with an ambitious, two-week engagement at New York's Blue Note, which began on Monday, February 20 through Sunday, March 4. Alexander is presenting the engagement in two parts: Part 1 - The Full Monty: 50 Years in Music! (February 23 - 28) and Part 2 - Jamaica Meets Jazz - A One Love Celebration (February 29 - March 4). The featured body of work and lineup will vary throughout the engagement, with each evening focusing on a project from Alexander's extensive career (six projects total will be presented throughout the engagement). Special guests throughout the two weeks include Russell Malone, Christian McBride, Dr. Lonnie Smith, Pat Martino, Freddie Cole, Dee Dee Bridgewater, Ernest Ranglin, John Clayton & Jeff Hamilton, and Robbie Shakespeare & Sly Dunbar, among others.


"I derive great personal joy and satisfaction from being able to present music that can bring out people of all persuasions and life styles," says Alexander, "from Kingston, Jamaica to New York and the rest of the world - that's my Harlem-Kingston Express train. That is what this Blue Note booking is all about."

On February 21 & 22, Alexander brought back his long-standing Triple Treat project. Originally consisting of guitarist Herb Ellis and bassist Ray Brown (a group that toured and recorded together throughout much of the 80's), Alexander will reinvigorate the trio in a program titled "Triple Treat Revisited," featuring one of the "living descendants" of Brown, bassist Christian McBride, as well as guitarist Russell Malone, who appeared on Brown's last recording, along with Alexander.

Alexander's Uplift! trio project (stemming from the March 2011 Jazz Legacy Productions release of the same name) was performed on February 23 & 24, featuring organist Dr. Lonnie Smith and guitarist Pat Martino respectively. On February 25 he showcased Ivory & Steel, a project that reflects the music of Trinidad and the steel drum tradition (much like the Iron & Steel group Alexander led in the 70's and 80's).

"Uplift! is a name that came to me and represents how I feel within myself when I play. It seems that when I play, many others also share this experience," says the pianist. "I wanted to have a straight trio record of mine out there, doing what I do the way I do it when I play live concerts - that old classic setting. And we have a ball doing it. The trio is my own personal big band/orchestra."

With "A Night at Jilly's" on February 26, Alexander honored the first jazz club he performed in when he arrived to New York City from Jamaica in 1963 - Jilly's. It was here that Alexander began to establish himself on the U.S. scene. During his three year's at the club, he had the privilege of accompany the great Frank Sinatra. Special guests for the evening will include vocalists Dee Dee Bridgewater and Freddie Cole.

Closing out Part 1 of Alexander's engagement is "The Montreux Alexander '76 Trio Reunion" on February 27 & 28, dedicated to one of the pianist's most celebrated albums, Montreux Alexander: The Monty Alexander Trio Live! at the Montreux Festival. The show featured the original trio, with bassist John Clayton and drummer Jeff Hamilton.

"Ray [Brown] used to frequently say to me 'you should form a trio with younger musicians' and in 1969 he introduced me to a young bass player named John Clayton, who I stayed in touch with," explains Alexander. "In 1975 my regular bass player suffered a physical ailment and John Clayton came and played with me in Annapolis, MD (on drums was Louis Hayes) and for the second week of that same booking he suggested his good friend from music school, Jeff Hamilton on drums. This unit stuck together for about two and a half years, playing consistently all year round. Montreux in 1976 was one of the nights where this trio was captured and to this date it still is one of my most popular recordings. This was a very well oiled combo."

Alexander goes directly to his Jamaican roots with Part 2 of the engagement. On February 29-March 2, Alexander will present "Monty meets Sly & Robbie," performances with drummer Sly Dunbar and bassist Robbie Shakespeare. Sly & Robbie are two of reggae's most recognized trailblazers and collaborated with Alexander on his album, Monty Meets Sly & Robbie. The pianist will conclude the engagement by bringing back his Harlem-Kingston Express group for two final nights on March 3 & 4. Special guests for these performance dates are TBA.

Alexander has been on the express track his whole life and now, in this 50th year of phenomenal musicianship, he shows no sign of slowing down. In 1961, the urban sophistication of jazz and the American songbook, and an invitation to accompany none other than Frank Sinatra, lured the teen prodigy Alexander away from Jamaica and the art form most associated with that nation. The move led to an extraordinary career in jazz, reggae and popular song including collaboration with greats such as Tony Bennett, Dizzy Gillespie, Milt Jackson, Sonny Rollins, Quincy Jones, Bill Cosby and Bobby McFerrin.