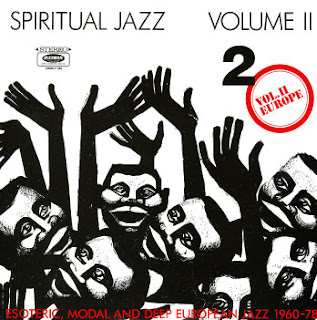 The sound of spiritual jazz from the European underground of the 60s and 70s – a really rich music-making scene that's every bit as impressive as the one going on in the US – as you'll hear from this amazing set of tracks! As with the first volume in the series, the collection is filled with modal jazz and other groovers – mostly long tracks that really stretch out, yet still always have a tight sense of rhythm – one that makes the music completely infectious right from the start!
It might be tempting to think of European jazz of this sort as kind of a copy of a US mode – but instead, it really happened simultaneously – as younger players were really pushing past the styles of previous years – and drawing not only on American jazz for inspiration, but also a range of different post-colonial modes particular to the European scene – bits of African, Latin, Brazilian, and other styles that really helped influence their approach. And in a way, it might even be said that the Europeans of the 60s had a much looser approach to rhythm, one that really allowed for experiments like these – and which, in turn, went back to have an influence on the American side as well.
Titles include "Temple Dancer" by Michael Garrick, "Communion" by Erich Kleinschuster, "Archangelo" by Raphael, "Africa Freakout" by Barney Wilen, "Corrida" by Nicolai Gromin, "Duke & Trane" by Hiekki Sarmanto, "Nana Imboro" by Wroblewski Jazz Quintet, "Las Morillas De Jaen" by Pedro Iturralde, "Bosnia Calling" by Dusko Goykovich, and "Candy Clouds (part 2)" by Hans Dulfer & Ritmo Natural.
Source: Dusty Groove
Posted by Jazz Chill at 3:43 PM