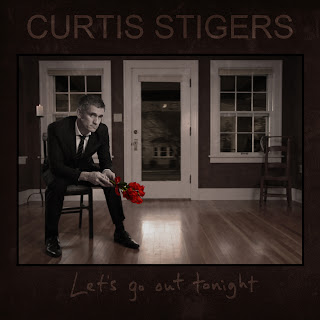 On April 24, 2012, singer/saxophonist Curtis Stigers will release Let’s Go Out Tonight, his seventh album on Concord Music Group. A departure from Stigers’ previous projects, Let’s Go Out Tonight sidesteps the Great American Songbook completely. Rather, it includes a vibrant cross-section of pop, folk, country and soul songs from songwriters ranging from Bob Dylan, Eddie Floyd and Richard Thompson to Jeff Tweedy, Hayes Carll and David Poe, whose “Everyone Loves Lovers” was crafted expressly for Stigers.


Though jazz has been integral to Curtis Stigers’ musical vocabulary throughout his career, his transformation from rock/pop headliner (of the sort that filled stadiums and made Leno and Letterman appearances) to jazz vocalist is barely a decade old, dating from the release of his debut Concord album Baby Plays Around in 2001. Stigers is often placed at the forefront of post-millennial jazz singers, but isn’t a pure jazz artist in the tradition of, say, Mark Murphy or Mel Tormé. Nor does he want to be. Critical to his unique vocal style and his inimitable interpretative skills is his ability to draw upon his checkered professional past and his wide-ranging musical tastes to synthesize myriad influences, coloring tracks with various shades of pop, country, folk, blues and classic R&B. Stigers’ genre-blurring instincts have never been never been more defined than on his latest album, Let’s Go Out Tonight.

Stigers also describes the new project as, “probably the most autobiographical album I’ve ever made. It hits so many places I’ve been and things I’ve gone through and am currently going through.” Ironically, given its deeply personal nature, Let’s Go Out Tonight is the first album since 2003’s You Inspire Me that includes no original Stigers songs.

While shaping the playlist with producer Larry Klein, Stigers says he, “played him a few songs I’d written, but I hadn’t been writing that much. It’s been a tumultuous year, and I haven’t been able to focus on songwriting. He didn’t think the ones I played fit in with what we were going for, and I had to agree with him.” Instead, Stigers and Klein each drew up long lists of song possibilities. “Then,” Stigers explains, “I started flying down to L.A. [from Boise, Idaho, his birthplace, and once again his hometown, after many years in New York] every couple of weeks and we’d play songs for each other. He came up with a lot of songs, but I came up with a lot, too; and we ended up using more of my suggestions, which I’m very happy about. They’re songs I’ve had in my back pocket for years and have always wanted to record. So, in a way, it feels like I wrote the album anyway.”

The set opens with Stigers’ rendition of Bob Dylan’s “Things Have Changed,” Dylan’s Oscar-winning song from the film Wonder Boys. From the Eddie Floyd canon, Stigers selected the relatively obscure “Oh How It Rained,” originally recorded by Floyd in 1971. “You Are Not Alone” was written by Wilco’s Jeff Tweedy for Mavis Staples. Another standout is the Neil Finn/Crowded House song, “Into Temptation,” about which Stigers says, “Give me a song about sex any day of the week.”

The David Poe song, “Everyone Loves Lovers,” on which Poe sings harmony, is, says Stigers, “A song I wish I’d written. Instead, David wrote it for me to sing, after hearing me with my band at The Blue Note in New York. It’s sweet and romantic, until you get to the part where it kicks you in the stomach. I love that brutal twist. We’ve all been there. No matter how perfect a relationship seems, there’s always a place down the road where it’s going to get rocky.” Another highlight is Steve Earle’s harrowing “Goodbye,” of which Stigers says, “We all spend periods of our lives numbing ourselves to block out what’s going on around us. I spent an unhealthy amount of my adult life doing that in different ways. It was a little scary how easily it fit.”

Stigers closes with the title track, The Blue Nile’s “Let’s Go Out Tonight.” “I’ve been a fan of The Blue Nile since their first album. Everything they’ve recorded is so understated and haunting. Basically, this song is about that unfortunate place that a relationship gets to, where you know everything is broken but all you want to do is pretend that it’s not. I spent years doing that. It’s about the saddest thing I can think of, and every time I hear it, I get choked up.”