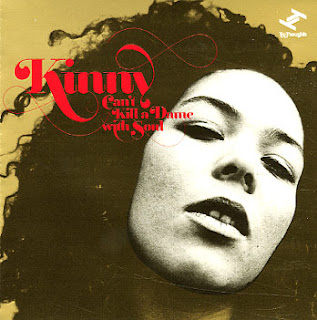 An acutely talented vocalist, Kinny trained classically as an opera singer before the spontaneity and freedom of jazz, reggae and soul lured her into pursuing her true passion.

Kinny – aka Caitlin Simpson – was born and raised in Canada and has a mixture of Jamaican, Native Canadian Indian, French and Swedish heritage. Describing herself as a ‘freestyle improv vocalist’, she fuses a classical mezzo-soprano sound with the jazzy attitude-soul of the likes of Erykah Badu, and her voice sashays effortlessly between soaring melodies, steely staccato phrases and caramel-dipped dulcet tones.

The first band Kinny performed with after cutting loose from the musical theatre world was Third Eye Tribe, who became well known and highly regarded in Canada and beyond for their electrifying live shows in which Kinny laid spontaneous, improvised vocals over electronic, dub and hip hop beats. On tour with the band in 2001, Kinny visited Bergen in Norway and loved the city so much that she moved there. Comparing Bergen to a Scandinavian version of her native Vancouver, Kinny finds inspiration and intrigue in the vibrant music scene, the extreme seasons and the peace and closeness to nature that abounds in sparsely populated countries.

In Norway, Kinny met and collaborated with the multi-talented Espen Horne (a producer, designer and professional goalkeeper…) and the fruits of their labours fell into the hands of Quantic, who passed them on to Tru Thoughts A&R Robert Luis. This resulted in the release of Kinny And Horne’s album Forgetting To Remember on Tru Thoughts in 2005. The album gained rave reviews and brought Kinny’s talent to the attention of the world’s most respected musical minds and tastemakers – including Daddy G, who invited her to audition as a vocalist for Massive Attack; and Andy Smith (with whom she is currently working on a set of tracks for a potential collaborative project in the near future). Kinny became a regular visitor to the UK with gigs at The Big Chill, Cargo, Jazz Café, Native and across Europe. During this period she hooked up with a variety of producers, guesting on tracks by the likes of TM Juke, Diesler and Quantic. Her versatility and charisma, and her desire to embrace new ideas and ways of creating songs became a sign of things to come.

For her debut solo album, Idle Forest Of Chit Chat, Kinny has hand-picked a roster of seven different producers including Quantic, Nostalgia 77, TM Juke, Hint and Norwegian rising star Souldrop, to push the boundaries of her own exceptional talent and expose herself to various styles and ways of working. The first single (a double A side, “Enough Said” // “Desire”) came out on 8th December 2008 and showcased an original, up-to-the-minute brand of modern soul that mixes irresistible beats, incredible melodies and a pop sensibility with her own unmistakable force of personality and raw talent.

With Can’t Kill A Dame With Soul, her voice brings a depth of soul to every recording we've heard of her – be it spacey club grooves or jazzy modern electronics-flavored soul. Since the preceding Idle Forest Of Chit Chat album, she's doing her thing with a much more personal approach, and this one fully delivers on the increasing promise over the past few years. Modern soul with spacey touches and one of the best albums on Tru Thoughts in quite a while! Can't Kill A Dame With Soul Includes "Floating Zzzzzzz!", "Big Fat Liar", "Tick Can Tock" feat Son Of Light, "Up Side Down", "Suffocate", "Lost Baggage", a great little electro soul cover of The Cure's "The Love Cats", "You From This Sting", "One Fan Talking", "Shrinking Violet" and "Mmm Of My Hums".
Posted by Jazz Chill at 9:36 AM