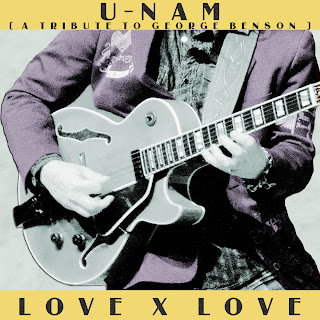 Chart topping jazz artist U-Nam (best known for his #1 hit “Street Life") is currently in the process of wrapping up production of his next project. Paying tribute to his hero and favorite artist George Benson, U-Nam will be releasing the album Week End in L.A. (A George Benson Tribute ) as U-Nam & Friends.
I just had the opportunity to listen to a sneak preview of U-Nam’s version of Benson's "Love X Love" from the forthcoming album due out this spring, and all I can say is WOW what a really cool track! I can’t wait to listen to the whole album when it’s released. Week End In LA (A Tribute To George Benson) also features: George Duke, Phil Perry, Ronnie Foster, Patrice Rushen, Tim TiO Owens,Paul Jackson Jr, Mike White, Smitty Smith, Eric Valentine, Kamil Rustam, Andreas Oberg, Franck Sitbon, Denis Benarrosh, Raymond Gimenes, Dio Saucedo, Jeff Lacey, Matt Rohde, Bill Steinway, Shannon Kennedy and many others.
According to U-Nam, with this new project, one can, “Expect the Unexpected!!!" U-Nam also mentionned that this will be the “Best, Biggest, Most Exciting and Intimidating project of his life." He also added, “before I even started to record any music on this project, my first thought was to call George [Benson], let him know about the project and ask for his blessing. I got more than I expected when he told me this, ‘Man, for sure you have my blessing and anyway whatever you’re gonna do it’s gonna sounds fantastic.’ After that I felt relieved and incredibly motivated to do a great hommage to GB!" The album is going to follow in the footsteps of “GB"; a mix of Jazz, R’n’B, Pop, Soul and full of innovation.