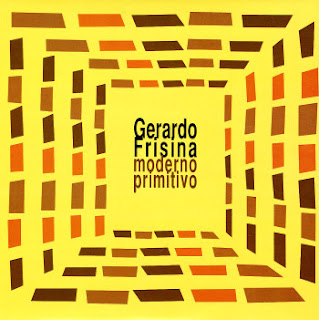 Gerardo Frisina goes back to the roots of the sound which has made him famous worldwide - the Latin sound of classics like Descarga or The Latin Kick (both previously released on Schema Records/Italy). This new one, Moderno Primitivo, is an EP about the encounter of the ancient Afro-Cuban tradition (the core of Frisina's artistic DNA) with a refined electronic taste. This component enriches drums and percussions and gives more edge to the whole production with details like pads and effects.
The title cut definitely earns the "Primitivio" in its title – thanks to some mighty spare acoustic rhythms at the bottom – much more classically Afro-Cuban than you'd guess from the house mix listed here! In fact, it seems that all instrumentation is played live – even though there's a tightness to the groove that might also fit a contemporary club sound too – massive conga lines, organ riffs, and a bassline that really stitches the whole thing together! In Moderno Primitivo the Latin ensemble headed by Frisina takes us into a jam session where percussions, piano and trombone play happily.
The "original mix" has some more live jazzy instrumentation on trombone and keyboards – and "Cogele El Ritmo" builds a strong groove with almost a descarga vibe – yet always that tightly-directed style we love from Gerardo Frisina! The "Latin House Mix" is a club version where the rhythmic element and the groove take control of the mix. The melody is broken and a Hammond plays over a ostinato bass. The flavour is definitely tribal."Cogele El Ritmo" is a trip into Frisina's Latin world. Slower than "Moderno Primitivo", still has a solid hook to the dance-floor and is a triumph of joy and colour.
Posted by Jazz Chill at 11:57 AM