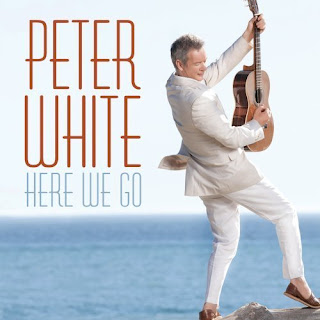 After nearly four decades of writing, recording and touring, either as a sideman or a solo artist, Peter White still seeks out the road not yet traveled. Whether it’s new songs, new ideas, new styles or new collaborators, this virtuoso of contemporary jazz, classical, pop and Spanish guitar is at his best when standing on the edge of creative territory waiting to be explored.

This sense of adventure is at the heart of Here We Go, his new recording set for release on March 13, 2012, on Heads Up International, a division of Concord Music Group. The 11-song set, co-produced by White and long time collaborator DC (George Benson, Al Jarreau, Bob James, Jeffrey Osborne) includes a range of original material written in the recent and distant past and features guest spots from saxophonists David Sanborn and Kirk Whalum.

Like his previous album, Good Day (2009), Here We Go is a collection of songs written and recorded to move people on a level that’s beyond any preconceived concepts. “When I start recording, I don’t have a vision,” White freely admits. “I just go with the moment – what feels good, what sounds good. The vision comes out of the music. The music doesn’t come out of the vision.”

Some of the energy fueling this record is the realization of White’s longtime dream to collaborate with Sanborn, whom he’d met while playing in a live jam session with several other musicians just a couple years ago. In truth, White has been a fan of the saxophonist for decades. “David is someone whom I’ve wanted to play with for the longest time,” he says. “This is someone who played at Woodstock and recorded with David Bowie. His sound has become the inspiration for many of my contemporaries. He’s a legend to me and to just about every musician I know.”

The infectious title track was written with Sanborn in mind, “It came to me one day while I was driving,” White explains. “I kept thinking, ‘this has to be something outstanding. I can’t go to David Sanborn with anything less!’ The excitement about having him play on my record inspired an uptempo rhythm, so I took it in that direction.”

The album fires on all cylinders from the very first notes of “Night After Night,” the effervescent opening track that was culled from some of White’s older, unfinished material. “DC helped me finish this song,” he says. “He added a lot to the rough idea that I had put together years ago. This song and some of the other older ones were ideas that I’d been living with for so long that I could only think about them one way. It was really helpful to have someone like DC hear it for the first time and bring about a fresh approach.”

The powerful ballad “Time Never Sleeps” was written with friend and keyboardist Philippe Saisse, and was originally intended for Saisse’s next CD. “Philippe called me one day and suggested that it should go on my CD, so we reversed the order of the verses so that instead of him playing the first verse on piano, it was now me and my guitar. After many other changes in the arrangement it felt right to go on my CD and subsequently became the second track.”

The wistful “If Ever…” includes White’s 10-year-old daughter, Charlotte White, on violin. “The first time she brought the violin home and played a simple major scale for me, I was almost in tears. I thought it was the most beautiful thing I had ever heard. So I wrote this part for her, I set up the microphone at home and she played it. It’s a song about looking into the future. It’s about possibilities, about what one could do with one’s life if things were slightly different.”

“Our Dance” features the ever-soulful Kirk Whalum on saxophone. White has performed and recorded with Grammy Award winner Whalum many times since the mid-1990s and has often cited him as a major influence. “When Kirk plays, he can connect directly to your emotions”, White explains. The song plays out as a waltz, depicting a couple's relationship and its many intricacies before ending in beautiful harmony.

“Joyride” started with an electric guitar melody created by DC on top of a disco beat, and later embellished by White’s acoustic. “I added a classical guitar arpeggio on top of this slamming disco groove in an effort to create something that people would want to dance to ¬– a sort of latter day ‘Classical Gas’” says White, laughing.

“Costa Rica” is built on an energetic Latin rhythm featuring the congas and timbales of longtime associate Ramon Yslas (Patti Labelle, Christina Aguilera) and pays tribute to a place that White has visited and enjoyed a number of times. “Whenever I go there, I’m struck by the happiness of the people and the beautiful countryside,” he says. “Those are the things that I tried to capture in this song.”

The carefree “My Lucky Day” is White’s nod to Bob Marley and reggae in general. “I’ve always been a fan of reggae,” he says. “Of course, you have to listen to Marley to get the authentic sound. On this song I just tried to convey the passion of reggae in my own way.”

“Requiem for a Princess” is a piece that was written shortly after the death of Lady Diana in 1997. “That was an event that hit everybody hard, especially if you were English. I remember watching the funeral car on live TV moving through the countryside. At every village, people threw flowers on the car until it was just completely covered. I poured all of my sadness into this song and haven’t been able to record it until now, as the memory was too fresh. It’s all minor chords and descending lines- maybe the saddest song I have ever written.”

Here We Go is, in many ways, a study in diversity – a collection of the joyous and the poignant, the newly crafted and the vintage. “I wanted variety,” says White. “I wanted songs that moved me, in the hopes that they’ll move the listener as well. I’m on a journey, and I want to bring with me anyone who’s willing to follow. That’s what the title of the album – and indeed, the spirit of the album – is all about.”
Posted by Jazz Chill at 2:35 PM