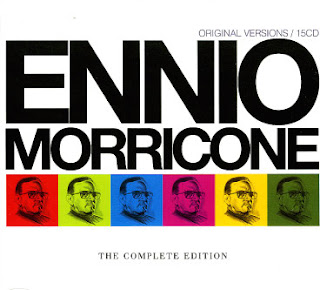 Ennio Morricone is an Italian composer and conductor, who wrote music for more than 500 motion pictures and television series, in a career lasting over 50 years. His scores have been included in over 20 award-winning films as well as several symphonic and choral pieces. Morricone is most famous for his work in the Spaghetti Westerns directed by his friend Sergio Leone, including A Fistful of Dollars (1964), For a Few Dollars More (1965), The Good, the Bad and the Ugly (1966), and Once Upon a Time in the West (1968).

This new collection includes an incredible amount of classic and obscure film music, original compositions, orchestral arrangements and more from the himself – an incredible 15-CD retrospective, and at a stunningly affordable price – selected by Morricone himself. This collection is by far the most encompassing set we've ever seen for him.

Of course he's most famous for his international film score work, from cult horror to classic Hollywood – so 9 of the 15 discs are film themes and score material, selected by Morricone and sequenced chronology on discs 1-9, selections including the themes or other bits from Il Buono, Il Brutto, Il Cattivo, Escalation, Galileo, Gli Intoccabili, Slalom, Svegliati E Uccidi, Metti Una Sera A Cena, Veruschka, La Donna Della Domenica, Copkiller, Malena, and so much more! Discs 10 & 11 cover his best work for television, disc 12 is a set of Ennio's contemporary classical compositions, disc 13 features favorite original songs he composed for a wide range of international artists, disc 14 includes favorite orchestral arrangements, and disc 15 features arrangements he did for hit songs by artists such as Gino Paoli, Donatella Moretti, Paul Anka, Jimmy Fontana and others.
Posted by Jazz Chill at 11:01 AM