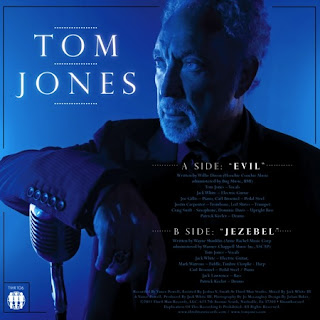 British crooner Tom Jones has teamed with producer Jack White for a cover of Howlin' Wolf's 'Evil', which has has debuted online. The track will be released on Jack White's Third Man Records label as part of their Blue Series. It is due out on March 6, but the pair’s version of ‘Evil’ premiered yesterday on BBC radio. ‘Evil’ as well as the B-side track ‘Jezebel’ also features Jack White's bandmates from The Raconteurs, Patrick Keeler and Jack Lawrence as well as My Morning Jacket's Carl Broemel. The Blues Series has previously featured artists such as Stephen Colbert, John C. Reilyy, and Insane Clown Posse, who put out their track 'Leck Mich Im Arsch' as an exclusive seven-inch and download last September. The unlikely hook-up with the controversial rap duo came about when they apparently crossed paths with White at an airport.

The seven-inch single will also feature a new rendition of ‘Jezebel,’ a song also taken on by Edith Piaf and Anna Calvi. Both songs will feaure White’s Raconteurs bandmates. Tom Jones is no stranger to covers, of course, in 1964 he performed the Ray Charles hit 'What’d I Say;' he covered Prince’s 'Kiss;' and on his 2003 album Reloaded, he included versions of Talking Heads' 'Burning Down the House,' Ram Jam's 'Black Betty' and other tracks.
Posted by Jazz Chill at 10:53 AM