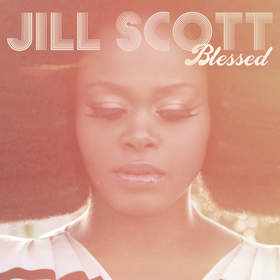 "So Blessed" takes Jill back to the hit making producers Vidal and Dre (Michael Jackson, Alicia Keys), who she previously worked with on her Grammy winning debut album Who Is Jill Scott?Vol.1. The mid tempo funky soul record inspires all listeners to wake up every morning and realize the blessings around them. "This record spoke to me as an inspiration for myself and for others to remember to count your personal blessings every day. The money, cars, trophies, can all disappear immediately... it's about what's happening in your life like your family, friends and health," comments Jill.
The record follows the success of her debut #1 record "So In Love" ft. Anthony Hamilton, which stood atop the radio charts for an astounding 18 weeks and tying the all time BDS record with Maxwell's "Lifetime" record at 17 weeks. Jill then proceeded to follow up with her next single "So Gone(What My Mind Says)" which was a top 10 record peaking at #7 atop the charts as well.

Reigning supreme, three time Grammy Award winner Jill Scott secured the #1 spot on the Billboard charts for the first time in her career with the release of The Light Of The Sun. With sales of over 135,000 units in her first week Scott beat out Bon Iver and Adele for the week's top selling album across all genres. The album scored rave reviews across the board from Wall Street Journal calling it "one of the superior albums of the year" to NPR Music naming it "Best of 2011," all the way across the likes of The New York Times, Entertainment Weekly, and People Magazine. Scott's successful return additionally came with a string of firsts, gracing her first Billboard Magazine cover, as well as her first solo performance at the 2011 BET Awards, which The Washington Post named as one of the night's greatest performances.

The Jill Scott Live Experience lived supreme throughout the summer as her "Summer Block Party Tour" garnered rave reviews across the country. Publications such as New York Magazine, Newsweek, People, and Time Out NY amongst others gave her outstanding reviews for her live performance. Boston Globe remarked "Jill does not waste her breath or time..." while the Washington Post remarked "a romantic journey from pleasure, to pain, to confusion and finally to acceptance, with enough rest stops for fun and laughter as balance."

In addition, Jill dominated television, having appearances on The Today Show, Tonight Show With Jay Leno, Live! With Jimmy Kimmel outdoor series, and Live! With Regis & Kelly. Not to be topped by her performance this year at The White House for the American Poetry Workshop as well as President Obama and his family.