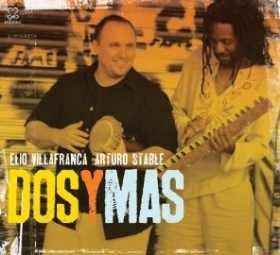 The intimate musical journey of Dos y Mas was sparked nine years ago when Villafranca and Stable met for the first time in rehearsals for Jane Bunnett's band The Spirits of Havana. Their collaboration in that setting was so satisfying that it led Stable to suggest they develop their original works together and record a duet album. Over the years, the project grew and took shape, expanding into a cultural exploration much greater than the two of them could have anticipated, hence the moniker, Dos y Mas. (Two and More.)

Steinway artist Elio Villafranca and Ritmo artist Arturo Stable were both classically trained at the Instituto Superior de Arte in Havana, and are now at the forefront of the latest generation of remarkable Cuban artists making major creative contributions to the international development of modern jazz.

Their rich Dos y Mas recording gracefully interchanges jazz and world elements: the rhythmic "Saghezi" percolates with Middle Eastern flavor, as Stable's ripe tapping of the Daf drum dances with Villafranca's emotionally gripping keyboard work. The gentle and romantic "Alla" conveys a sunlit sensibility, with the soft sounds of running water trickling in the background. According to Arturo, the song is meant to "evoke the things in life that you see from the distance and you would like to get closer to."

Most steeped in the duo's shared Cuban history is the captivating, "Arara," in which the pair recreates the ancient melody of Ojún Degara, one of the oldest Arara folkloric groups living in Cuba. Taking it one step further, the beautiful melody is paired with a traditional rhythm from Danzòn, the official dance of Cuba. The evocative "Vertiente," inspired by the flamenco traditions of Southern Spain, blends the "Buleria" rhythm with Afro-Cuban and jazz inflections. Of the songs written in the Afro-Cuban tradition, including "En La Colonia," Stable comments, "I got inspired by the many traditional chants from the Yoruba religion that I listened when I was growing up in Cuba."

Growing up in Cuba and then relocating to the United States had a huge impact on both artists musically. Villafranca notes, "In the streets of my hometown, San Luis in the province of Pinar del Rio, I was exposed at a very early age to Tambor Yuka, a musical form rooted in Congolese traditions. In Cuba I was not only exposed to the rich Diaspora of Afro-Cuban music as well as the various genres of popular Cuban music, but I also received a top quality education in European classical music. When I moved to the U.S. and studied jazz, this and other forms of music--South American, Middle Eastern, and other Caribbean genres--helped to shape my musical language. The music I wrote for this album is the result of all of the musical journeys I've traveled for many years, investigating different musical propositions."

The Dos y Mas journey comes to a wistful close with "Cuba Linda." Written by Villafranca, the song is Villafranca's and Stable's first recording of a Coro de Clave y guaguancó composition. Originating from the tradition of choral singing in Barcelona, Spain in 1845, "Cuba Linda" expresses the duo's nostalgia for their homeland. Guest vocalist Igor Arias sings, "Cuba Linda, como te extraño" or "Beautiful Cuba, how much I miss you,"on the nearly eight minute-long heartfelt tribute.

Because percussionist Stable initially trained as a pianist, and Villafranca began his studies as a percussionist, the two have an extraordinarily deep understanding of both instruments and of each another's natural instincts. The result is a glorious musical conversation that is articulate, romantic and emotive. Says Stable, "Working with Elio is a very rewarding experience. He is always open to new ideas and to taking risks, musically speaking. I love that because it means the music can always take a new direction. We share similar backgrounds culturally and musically, so the connection between us was there since the beginning. I always feel I learn something new when we perform together."

Villafranca agrees, "Arturo's musicality and ability to play many different hand drum instruments with facility, elevated my playing and my interpretation of his playing. Together we have arrived a new musical dimension."

Together and separately, Villafranca and Stable have developed loyal followings both as leaders and for their work with many of the world's top musicians, including Wynton Marsalis, Pat Martino, Johnny Pacheco, John Faddis, Billy Harper, Esperanza Spalding, Lionel Loueke, and Paquito d'Rivera.

Both artists are avid and creative educators who are as in demand as lecturers at universities as they are as performers at festivals, clubs and cultural centers. Villafranca is a resident professor at Temple University, while Stable teaches at the University of the Arts in Philadelphia, where he designed their unique Hand Percussion.

Villafranca's 2003 release, Incantation/Encantaciones, featuring Terell Stafford, Jane Bunnett and Pat Martino, quickly established the young pianist as an important new artist on the scene, and earned him a spot in Jazz Times magazine's 2003 Critics Poll for the Top 50 Best Jazz Albums. In 2010, Villafranca received praise for his exceptional work as the pianist, composer and co-producer of Latin percussionist Chembo Corniel's CD, Things I Wanted To Do, which was nominated for Best Latin Jazz Album of the Year in the 53rd Annual Grammy awards.

Dos y Mas marks the Motéma music debut for both leaders, who add some Cuban flavor to the strong and growing roster of world-jazz artists on the label which include: NEA Jazz Master Randy Weston and his African Rhythms, Jamaican jazz/reggae legend Monty Alexander and his Harlem Kingston Express, and the recently acclaimed Brazillian/Israeli duo Roni Ben-Hur and Nilson Matta.