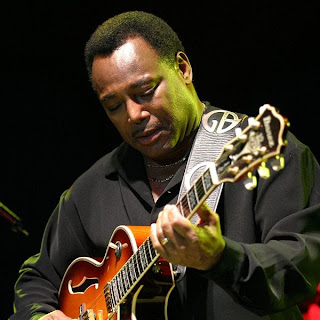 Congratulations to George Benson and all involved in the making of Guitar Man. It was announced that Guitar Man has won the award for Outstanding Jazz Album at the 43rd NAACP Image Awards.

On Guitar Man, Benson’s mastery of the guitar is demonstrated in a variety of styles and settings, all with legendary jazz roots. The opening track “Tenderly” is a solo guitar track that serves as a reminder that Benson is one guitar man with sufficient technical and interpretive skills to be a band unto himself. The second song is an intriguing rendition of Lennon and McCartney’s “I Want To Hold Your Hand.” Along with Benson on nylon-string guitar and Garfield on piano are guitarists Paul Jackson Jr. and Ray Fuller; bassist Freddie Washington; drummer Oscar Seaton, Jr. (who regularly tours with Benson); violinist Charlie Bisharat; and flutist/clarinetist Dan Higgins. All come together to create a fully orchestrated sound that casts one of the most simplistic of the Beatles’ early love ballads into something full-bodied and engaging.

The remainder of the set consists of either solo guitar tracks or Benson backed by the aforementioned five-man team, which lays down an easygoing rendition of Stevie Wonder’s “My Cherie Amour.” Benson delivers the lyrics in his own engaging vocal style that includes a healthy dose of his trademark scatting guitar accompaniment.

Other highlights include a rollicking version of the Champs’ 1958 instrumental hit, “Tequila,” followed a couple tracks later by “My One and Only Love,” which opens with a 16-bar solo jazz guitar intro that segues into a sweet vocal ballad. Benson delivers a playful straightahead rendition of “Paper Moon” with the quartet, followed by a solo guitar rendition of “Danny Boy” (one of the few times, if ever, that a guitar sounds like bagpipes). In the final stretch, Benson and Garfield set up a lush guitar-and-piano arrangement of the smoky standard, “Since I Fell For You,” with Benson once again stepping up to the mic for an emotional delivery of the song’s impassioned lyrics.