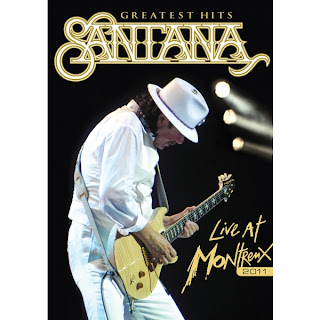 Santana were founded in the late sixties and came into the spotlight following their glorious appearance at the Woodstock festival in 1969. Their eponymous debut album was released the same year and became a global success, introducing the public to the band’s unique blend of Latin rhythms and guitar based rock. With legendary guitarist and band leader Carlos Santana at the helm, hit albums and singles followed through the seventies, eighties, nineties and up to the present day. Both Carlos and the band have been frequent visitors to Montreux over the years and in 2011 they presented a stunning concert of their greatest hits, classic album tracks and brilliant cover versions from their debut album right up to 2010’s “Guitar Heaven”. This is the ultimate Santana live concert and absolutely not to be missed. Over three hours of music available in Blu Ray Disc (Single) or DVD (Two Disc Set).  Release date is February 21, 2012.

Blu Ray Disc has same track listing as DVD, but on one singular disc.
Bonus Features: Interviews with Carlos Santana, Cindy Blackman Santana, Behind The Scenes Footage.
Posted by Jazz Chill at 3:38 PM