KEN NAVARRO - THE TEST OF TIME 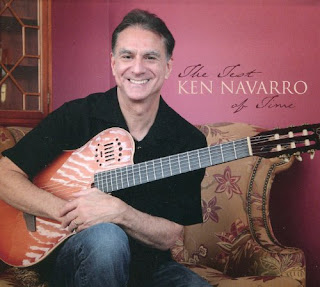 Ken Navarro has released the first video "Message In A Bottle" from his upcoming album The Test Of Time, set for release on March 20, 2012 (see the link below for viewing). The Test Of Time is Ken Navarro's 20th release. Navarro is an accomplished guitarist in the Contemporary and Smooth Jazz genre, with decades of widespread airplay, media coverage and touring. His new CD is fingerstyle solo guitar, and this music and style are not just contemporary jazz but also acoustic guitar virtuoso. It is solo guitar like you never imagined it. Genuine, flawless performances with melodies, bass lines, harmonies, percussion - all masterfully played simultaneously on just one guitar.

Navarro's previous CD Dreaming Of Trains was pre-nominated for the 2011 Grammy awards in 2 categories and his 2008 album The Grace Of Summer Light was named the #1 contemporary jazz album of the year at Jazz Times. Over the past 20 years, he has had numerous Top 5 songs at national radio and has performed in every major US city. In each of the 12 songs that make up The Test Of Time, Navarro delivers a genuine, flawless performance, where all of the melodies, bass lines, harmonies and even percussion are masterfully played simultaneously on just one guitar without overdubbing. Some of the contemporary classics included are The Police's “Message In A Bottle”, John Lennon's “Imagine”, Glen Campbell's “Wichita Lineman”, Pat Metheny's “Letter From Home” and Santana's “Europa”. These performances are magical in many ways and will be appreciated by a wide audience. Navarro's has infused himself in each style of solo guitar playing so that it transcends the song and style and becomes an original Ken Navarro masterpiece.