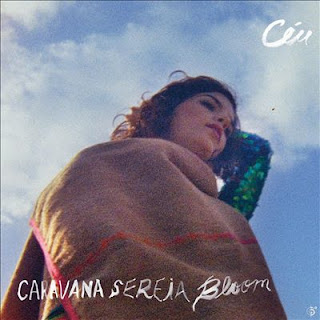 The open road, the bohemian atmosphere, the existential mythology of travel—these were the visions in young Brazilian singer Céu’s mind while creating her latest album. One of the most sonically adventurous artists in her country today, numerous road trips from her São Paulo home to Brazil’s Northeast proved to be the perfect inspiration for this newest sonic adventure.

“All the files were sitting in a big folder on my computer under a very boring name: Studies on the Road,” says a reflective Céu. “So I decided to mix the title of one song with a word found in the lyrics of another. Then I added ‘Caravan’ in front of the sentence. In the end it made a lot of sense, as the album was created in partnership with a lot of other people.”

The result, Caravana Sereia Bloom (Six Degrees Records), is her boldest work to date. Today, the Grammy/Latin Grammy – nominated singer seems to have more in common with the psychedelic oeuvres of early Tropicalia artists and Os Mutantes than the restrained musings of Jobim, eschewing much of the laid-back bossa nova and samba that caused Starbucks to make her self-titled debut the first international release in its Hear Music™ Debut series.

This can quickly be heard on the ska-based, carnival-esque “Asfalto e Sal.” Like the greats mentioned above, Céu uses airy guitar riffs and lazy drum rhythms so prominent in Caribbean music to seduce your ears. Once you’re nodding along, her poetry sets in. This particular track looks at sociological behaviors in urban environments. “Our sense of ‘progress’ that pushes us to continuously grow, ends up dominating and polluting our culture,” she says. “The character in ‘Asfalto e Sal’ goes on the road in order to jump out of this kind of life.”

Ironically, São Paulo may be the safest place to escapes such “progress.” Since 2007, the world’s fourth-largest city has completely banned outdoor advertising—no billboards, no ads on the sides of buses or kiosks, no Times Square lighting displays. Nevertheless, no land is an Eden. With a sense of escape gnawing inside of her, Céu derived these Kerouacian fantasies from a piece of Brazilian cinematic history.

“The record as a whole was a way to pay tribute to ‘Caravan Holiday’ from the movie Bye Bye Brasil,” she says. The movie tells the story of a trickster magician, Gypsy Lord, and his Caravana Rolidei. A local accordion player falls in love with the notion of life on the road (as well as Lord’s precious dancer, Salomé), and jumps on board with his own pregnant wife, Dasdô. The movie takes many twists and turns, reminding us that it is the journey and not the destination that counts.

You can immediately hear how much Céu is enjoying her own journey on this 35-minute gem. Producer Gui Amabis does a fantastic job of allowing stripped down guitars to convey a constant sense of momentum. Pieces of popular Brazilian Music from the Northeast are embedded in lush reggae grooves. A lifelong fan of Bob Marley and all things Jamaican, Céu stretched her musical vocabulary to draw inspiration for each song, exploring a multitude of Latin American sounds: cumbia, lambadas, carímbos, bregas and guitarradas.

“Basically this entire album is a collection of short tales revolving around the chaos of a road trip,” she says. “In each song I put myself in a different character’s place. In ‘Palhaço’ I am working in a circus and have to convince the clown to go back on stage. And then in ‘Amor de Antigos,’ I have to convince an old lady to remember her true love.”

“Retrovisor,” the album’s first single, is set in a dark bar near the end of a night of Karaoke. The last performer sings about heartbreak to a disgruntled crowd of waiters and truck drivers. Keeping true to the record’s theme, Céu and crew took their own road trip to Recife’s Vila Velha to film the video.

Then there’s the dripping, sensuous rhythm of “Streets Bloom,” one of the few songs that Céu has ever sung in English. Wanting to collaborate with friends, she called experimental vocalist Lucas Santtana, whose recent album Sem Nostalgia has received numerous accolades in Brazil and America. “The idea was to create a Brazilian road trip with a Wild West flavor,” she says.

“He liked the idea and came back with beautiful lyrics, as if I were telling people my impressions of a such a trip.”

The brooding, ambient nature of this latest release is intentional. While updating bossa nova and samba put Céu on the global map, she chose to travel to Brazil’s Northeast for the heaviest dose of musical inspiration. Utilizing the post-psychedelia synthesizers and guitar effects of the typical sounds of Brazil’s popular music from the Northeast, she also pays tribute to modern innovators, all the while evolving her own unique and personal sound. Céu’s sound is as relevant to Brazil today as her legendary forebears two generations ago. Caravana Sereia Bloom is this girl from São Paulo’s finest moment in a career that shows no sign of slowing.