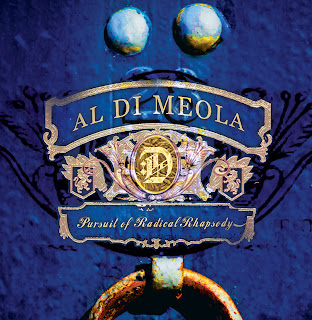 Following the much ballyhooed Return To Forever reunion tour of 2008 - guitarist Al Di Meola began refocusing his energies on his World Sinfonia band. Live in Seattle and Elsewhere documented his tightly-knit chemistry in concert on a 2009 tour with his acoustic ensemble of accordianist Fausto Beccalossi, second guitarist Kevin Seddiki, bassist Victor Miranda, drummer Peter Kazsas and Di Meola’s longtime collaborator Gumbi Ortiz on cajon and assorted hand percussion. Di Meola’s rhythmically-charged flamenco and tango inspired originals revealed his knack for advanced harmonies along with his embracing of simple, beautiful, alluring melodies. And although he may be a romantic at heart, he showed that he is still very much capable of flashing those legendary chops that graced his ‘70s classics like Elegant Gypsy and Casino.

On Di Meola’s recent outing, Pursuit of Radical Rhapsody, the guitar virtuoso and world music pioneer deals in more evocative and compelling sounds with his World Sinfonia ensemble, delivering hauntingly beautiful and deeply moving music from track to track. The collection kicks off with the entrancing, suite-like “Siberiana,” which opens with some tender call-and-response between Beccalossi’s accordian and Di Meola’s nylon string acoustic guitar before building to a turbulent section with searing electric guitar lines on top. On the affecting “Paramour’s Lullaby,” Di Meola takes a more deliberate approach on electric guitar, spinning warm, lyrical lines over the beautiful harmonies before engaging in spirited call-and-response with Beccalossi near the end of the piece. The rhythmically charged “Mawazine” (featuring percussionist Mino Cinelu) is broken up into two parts on the album and showcases some typically tasty electric guitar work by the leader.