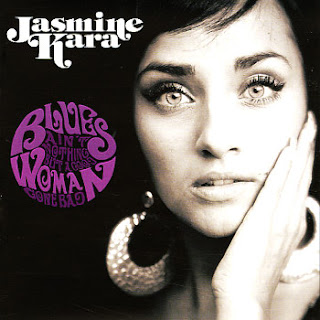 Born in a small Swedish town to an Iranian father and a Swedish mother, Jasmine Kara knew as a little girl that music was her calling. Kara started performing at talent shows and took every chance she could get to get up on the stage. Singing and exploring new music was exciting and life ahead seemed beautiful for the young Kara. Then her life took a very dramatic turn. In her mid-teens she fell in love for the first time. But this love soon turned out to be everything but an innocent teenage love affair. Kara quickly found herself trapped in a most abusive and totally destructive relationship and she started sinking deeper and deeper. This very dark period almost took her life. When she was completely down and out, way down at the bottom a miracle happened. Someone gave her a guitar. And she remembered how good music used to make her feel. How music can heal. Shortly thereafter Kara decided to break up and leave. She left the town she grew up in, the relationship that almost killed her - and her old life, in search for a new. She started travelling the world, determined to find a way to make a living as a performing artist.
When Kara arrived in New York she immediately knew she had come home. The city’s music scene in general and it’s jazz, blues and R&B clubs in particular made her realize that this was where she belonged. She started performing all over town and took every chance she could get to sing to anyone who’d listen. Gradually she started noticing how her powerful voice could move her audience, making her even more certain that this was what she needed to do for the rest of her life. However, that dream of a recording contract kept eluding her, depsite promises and close calls.

Eventually she was picked up by new indepenent label Tri-Sound. One of it’s founders was legendary record man Marshall Chess, who ended up as Kara’s Executive Producer on her debut album Blues Ain’t Nothing But A Good Woman Gone Bad. A collection of classic old school blues and R&B-numbers, but with Kara's trade remarkable voice, the album was recorded during 48 hours in the well-renowned Cosmos Studio in Stockholm, Sweden for a 2010 summer release.

The album track list is heavy with adapations of traditional material and blues from the Willie Dixon and old school Chess school – though it's done in a moddish mid 60 style – heavy drums and bass lines, soulful guitars, horns and keys. The album was  was produced by Michel Zitron & Johan Wetterburg, and it includes "Fire", "Are You Doing Me Wrong", "Ain't No More Room", "Try My Love Again", "Must I Holler", "My Babe", "Ordinary Joe", "In The Basement" (Parts 1 & 2), "Grits Ain't Groceries", "Liberation Coversation" and more.
Posted by Jazz Chill at 9:31 AM