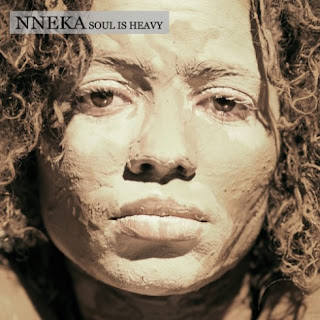 Soul Is Heavy is the new album from award winning Nigerian singer/songwriter, Nneka. An effortlessly balanced combination of hip hop beats, reggae grooves, brass riffs and African-pop is the canvas for its motif of love, pain, politics and God. Featuring guest collaborations with The Roots' Black Thought ("God Knows Why") and Ms. Dynamite ("Sleep"), Soul Is Heavy further affirms her credentials as a fast-rising star of black-consciousness music.

Nneka's natural energy channels hope and optimism throughout her writing ("Shining Star"), but her signature steeliness and stark life observations are maintained ("No Doubt"). This isn't an album that has to be pretentious to stand out. It is real, honest, true to itself and bursting with feeling.

Soul Is Heavy is both affirming and compelling by addressing the tough realities and uncomfortable truths of modern politics - both personal ("Stay") and international ("Soul is Heavy") - adding credence to her comparisons with Lauryn Hill / Erykah Badu.

A majority of the album has once again been produced by close friend and co-writer DJ Farhot, and mixed by Tom Elmhirst and Philippe Weiss whose recent credits include Amy Winehouse, Adele, Cee Lo Green and Wyclef Jean.

Nneka kicks off her North American tour on March 6th in Vancouver with dates following in San Francisco, Los Angeles, Austin for SXSW, Chicago, New York, Philadelphia and others.