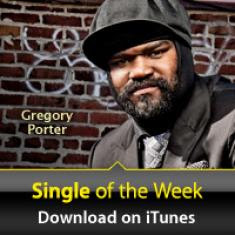 "Real Good Hands," a track from Be Good, internationally acclaimed vocalist Gregory Porter's sophomore release on Motema Music, has been selected by iTunes as its Single of the Week for the week of February 14. "Real Good Hands," will be available for free download on iTunes from February 14 through 20.
Porter's 2010 debut release, Water, racked up a continuing stream of accolades and awards around the globe, including a ‘Best Jazz Vocal ' Grammy® nomination (a rare feat for a debut recording), soaring to #1 on both iTunes and Amazon in the UK, and landing on an international array of year-end ‘Best Of' lists for 2010 in several genres.
On Be Good, Porter has crafted a work that not only meets, but is likely to surpass, the heightened expectations of the jazz, blues and soul audiences eagerly awaiting his follow up to Water. Featuring Porter's winning combination of "outstanding original songs, erudite lyrics and social comment, top drawer musicianship and improvisation, and a voice to die for" (Jazz Wise), Be Good is a musical compendium of groove-driven delights, ranging from quiet ballads to up-tempo burners, from romantic charmers to powerful, blues-tinged anthems.

Be Good finds Porter surrounded by the core of his powerhouse working band, with whom he recorded his Grammy- nominated debut, and who have performed with him for over three years: Chip Crawford on piano, Aaron James on bass, Emanuel Harrold on drums, and Yosuke Sato on alto sax.Under the sure hand of producer Brian Bacchus, Porter and the band rise to new heights on Be Good, which is further fueled by richly emotional horn arrangements by Kamau Kenyatta, who produced Water and who continues to play an important role in Porter's sound. Kenyatta also performs on one track ("Painted on Canvas") and guest instrumentalists Keyon Harrold on trumpet and Tivon Pennicott on tenor sax are also featured throughout.

Porter tapped the prodigious talents of veteran producer Brian Bacchus for Be Good. Bacchus, whose A&R successes have included Norah Jones' Grammy® -winning Come Away with Me, has produced projects for such acclaimed jazz artists as Randy Weston, Lizz Wright, Richie Havens, Ronny Jordan, and Patricia Barber.
A North American tour is currently underway, with Porter spending the week leading up the release of Be Good with a series of shows at Pizza Express in London - which earned him a four star review in The Guardian - and in Amsterdam. He'll return to the US for shows in March and April in Boston, New York, Detroit, Chicago and Pittsburgh, with appearances scheduled for summer festivals and west coast shows in the fall. Full tour information is available at http://www.gregoryporter.com/, and at http://www.motema.com/.
More Information: http://itunes.apple.com/us/preorder/be-good/id496959087
Posted by Jazz Chill at 4:53 PM