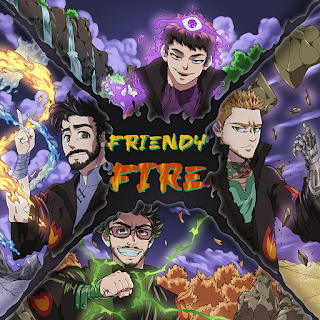 Friendy Fire is an explosive collection of original compositions, fusing supercharged rock with contemporary jazz, while also drawing inspiration from animated Japanese TV shows and films. Friendy’s vision is to create a powerful musical experience that mixes a strong rhythmic feel with an abstract atmosphere.

The album will be released through GSI Records (Eric Harland) and is a culmination of over a decade of friendship, hard work, and a common view of life. The band’s quirky social media activity uses humor and creative videos to create buzz and hype through their original music.

Friendy’s members have been living in NYC and Boston for the past 3 years and have performed regularly on the scene. They have played or recorded with the likes of Kenny Garrett, Mark Turner, Kurt Rosenwinkel, Dave Douglas, Alex Sipiagin, Andy Mckee (bass), Jonathan Finlayson, and more.

The album was mixed by Brett Bullion, who mixed albums by Dave King and Reid Anderson, members of the Bad Plus. It was then mastered by Nate Wood, drummer for Tigran Hamasyan and Kneebody, who also mastered albums by Ben Wendel, Aaron Parks, Donny Mccaslin, Shai Maestro, and Tigran Hamasyan among others.

Each song in the album has its own narrative and imagery- "Glass Box" conveys the feeling of finally breaking out of a shell, "h" tries to give the feeling of sitting alone in a dark room lit only by your computer screen and "My Ninja Way", named after a quote from the Japanese anime “Naruto”, is all about staying true to your inner self and values.

Each member’s unique style and approach adds a different dimension to Friendy’s musical universe. Zohar Amar has a passionate and rhythmic approach to the horn, very much influenced by African rhythms such as Gnawa. His harmonic language blends very well with Noam Borns’ into a style which they cultivated together since their high school days, based around concepts by Allan Holdsworth and Shostakovich among others. Borns has a charismatic and defined style, blending emotional melodicism with detailed and complex lines and textures coming out of Paul Bley, Aaron Parks, and Lennie Tristano. Daniel Ashkenazy’s playing is very imaginative, has story-like qualities, and manages to push boundaries and conventions of how to approach harmony, rhythm and form on the bass. As a unit, Ashkenazy and drummer Shai Yuval are cohesive and dynamic and are able to make both a swing tune and a heavy rock groove sound just right. Yuval is a very dynamic and wholesome musician, bringing a compositional approach to the drums that compliments the music and helps guide it where it needs to go. As a composer, drummer, and a person, he is the voice of reason that ties the music together.

Friendy’s members have been playing together for over 13 years, and share a unique musical language and view of the world- both of which are portrayed and demonstrated in the album Friendy Fire.