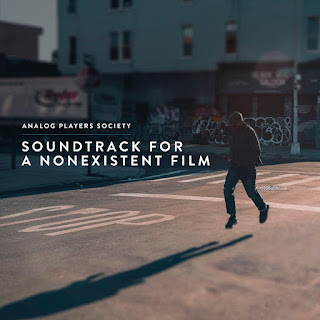 Analog Players Society is proud to announce “Chase,” the first single and music video from Soundtrack for a Nonexistent Film. This record is an instrumental, cinematic, set sampled from the original recording session that birthed TILTED. Since its August release, TILTED was included in Bandcamp’s “best jazz releases” and garnered strong support from Jazziz, Medium, Postgenre.org, NY Music Daily, and The Vinyl District.

Out now, Soundtrack for a Nonexistent Film is a nod to the classic, sample-heavy production of Hip-Hop’s Golden Age.

“Chase,” is accompanied by a stunning music video directed, shot, and edited by Jude Goergen and produced by Mona Kayhan and Amon Drum. The concept revolves around New York City and the resilience and drive of its people, even when running from the many things one can fear.  Amon explains, “…That’s NYC. We can keep running forever. It might be ridiculous, scary, and we might get tired, but don’t even try to outrun us.”

The Analog Players Society is a collective effort founded by producer and engineer, Amon, out of his first studio, “The Hook,” in Red Hook, Brooklyn. The APS collective features a rotating ensemble cast of some of the top players in New York City. Amon has been "cherry picking" these great musicians and producers for a few years now in this rich garden. APS' various projects, which are eclectic by nature, carry serious strains of the Jazz, Dub, Funk, Afrobeat, and Soul variety within it. APS’ 2012 debut album, Hurricane Season In Brooklyn impressively debuted in the top 15 of the Billboard Contemporary Jazz Chart with press accolades pouring in from NPR’s Fresh Air, Wired, and All About Jazz to name a few.

Fast forward to April 2019 when APS was reborn at The Bridge Studio, the new large-format recording studio in Williamsburg, Brooklyn designed and owned by Amon and now a major player on the NYC studio scene.

Amon expresses, “When Ben and I were in the studio, he made a crazy call and said, let’s not do this to a click. Initially, I thought he was crazy. We are trying to sample our own session, to make instrumental Hip Hop, and you don’t want to record to a click?? He said, ‘nah.’ So I said, OK! That’s what makes us great partners. That was the right call, it let the players be free.”

Ben adds, “The fact that so much music came out of this one three-hour session really blows my mind.”