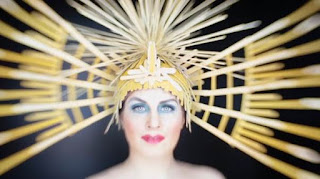 Berlin singer Nina Ernst has released a new album: "A Diva's Mind" (Label: Fina Flor, Rio de Janeiro). Originally it was supposed to be a CD to a self-written music comedy show about a failed diva. The result was a complex international music and video project.

Nina Ernst, who released the highly acclaimed Bossa Nova CD "Nina Ernst canta Jobim" at the label Fina Flor in Rio de Janeiro nearly 10 years ago, met the star photographer Gal Oppido (for Vogue, among others) in São Paulo on one of her numerous tours in Brazil.

Since the musical production of "A Diva's Mind" took place in Berlin at the same time and Gal Oppido liked the music very much, it turned out that he produced artistic videos of the recordings and included São Paulo's avant-garde artists in the production.

The album was produced, arranged and mixed by American bassist Max Hughes and percussionist Andreas Weiser and also the rest of the band is made up of top jazz musicians from the Berlin scene.