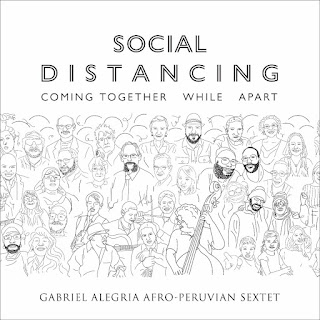 On the band’s latest effort, Social Distancing, Alegría digs deep into his longstanding relationship with the band’s fan base. Most recently, during the 2020 pandemic, the band opened a member’s area on their web site to include footage and closer access to their work. Featured on the new CD’s cover are hand drawings of more than 120 fans who sent in their pictures as part of the design process. (The band’s unique business model has included fan-accompanied tours to Peru.) The faces of the pandemic are thus vividly captured in an album that according to Alegría “will always serve as a memoir of what we went through in 2020.”

Alegria points out that the band dealt with the pandemic very directly in that one member battled Covid in the ICU—and won. “The album is a statement and a reflection not only of the pandemic,” he adds, “but also the issues of social justice that have surfaced as a result.”

Alegría became a U.S. citizen very recently, and Social Distancing is his way to connect to that new part of his identity. “I’ve never felt it was my place to say much about the negative side of the U.S. But now, as a dual citizen, I believe it is my duty,” he affirms.

One of the album’s highlights is “George & Breonna,” which, according to Alegría (pictured at right), reminds us of “the other pandemic: systematized social injustice in the United States.” The musical exchanges between Alegría and saxophonist Laura Andrea Leguia on this track are a testament to the deep level of communication between the members of this band. “The musical phrases Laura Andrea and I exchange are really from the gut,” says Alegría.

This recording goes far beyond the music. “An immigrant knows all too well what it is like not to have rights,” says Alegria, “and our writing on the album reflects that experience and intention.”

“Covid-19” is a powerful festejo written using a classical composing technique called serialism. “The melody is comprised of a 12-tone row where all 12 notes of the chromatic scale must be used before any notes repeat,” explains Alegria. “The result is a very angular and aggressive sound. Hence the title Covid-19.”

The haunting and relentless piece called “The Mask” includes spoken word by master percussionist Freddy “Huevito” Lobatón that echoes the idea with which Alegria frames the entire album: a poem-gone-viral by Kitty O’Meara called “And the People Stayed Home,” which is both the opening and conclusion of the album. The first iteration includes the poem read by the author in English, and the last track in Spanish.

The darkness is brought to light by driving and uplifting tracks such as Alegría’s “Octavio y Natalia,” which the composer describes as the counterpart of “George and Breonna.” "That's my daughter and Yuri's son playing and being children, being innocent, just like George and Breonna probably played when they were kids. The point of connecting these two tunes in red type on the CD cover is that Yuri and I—and every parent on earth—should never see the death of their kids. And they certainly should not be afraid of that possibility existing. Hence our web site right now says #blacklivesmatter at the header.” The spirit of the song is expressed over a festejo rhythm, with the saxophone and trumpet pursuing circular phrases throughout.

Social Distancing is very much a concept album, a testament-in-sound that documents the story of the 2020 pandemic. Its infectious rhythm makes the listener feel that concept as well as think it—on a par with the great concept albums of the 20th century (think Sgt. Pepper’s Lonely Hearts Club Band).