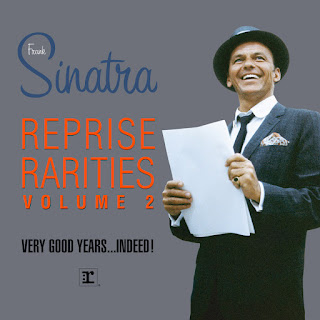 A collection of tracks from one of popular culture's most romantic singers goes digital today with the release of Frank Sinatra: Reprise Rarities Volume 2 from Frank Sinatra Enterprises and UMe. Featuring 13 Reprise tracks, many making their digital debut, the collection follows Volume 1 released last month in honor of Frank Sinatra's birthday and celebrating the 60th anniversary of "The Chairman of the Board" founding Reprise Records.

Hailed by The New York Times for an "extraordinary voice [that] elevated popular song into an art," Sinatra realized a long-time dream by forming his own record label, Reprise, in 1960. At the time Sinatra's business model was highly innovative in the recording industry; the very first of its kind, he pioneered the concept of having artists create and control their recordings.

"Untrammeled, unfettered, unconfined" is how the early advertisements described Sinatra on Reprise.

Throughout his seven-decade career, Frank Sinatra performed on more than 1,400 recordings and was awarded 31 gold, nine platinum, three double platinum, and one triple platinum album by the Recording Industry Association of America. The three-time Oscar® winner also appeared in more than 60 films and produced eight motion pictures.

Sinatra was awarded Lifetime Achievement Awards from The Recording Academy, The Screen Actors Guild and the National Association for the Advancement of Colored People (NAACP), as well as the Kennedy Center Honors, the Presidential Medal of Freedom and the Congressional Gold Medal.

Frank Sinatra demonstrated a remarkable ability to appeal to every generation and continues to do so; his artistry still influences many of today's music superstars. He remains a legend and an inspiration around the world for his contributions to culture and the arts.