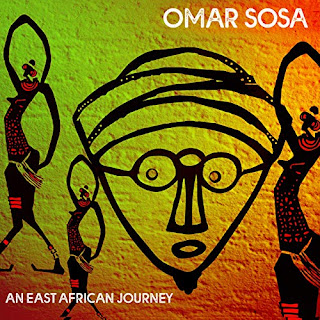 "Binding folkloric music to the very essence of World Jazz, Sosa conducts this East Africa pilgrimage with the ease of a master whose pursuit of creative endeavors has always been guided by ingenious expressions of musical curiosity. Pensive, festive and joyful, 'An East African Journey' is a chance to swim in a sound that elegantly connects so many important musical traditions with those now flourishing in the present." —Michael Ambrosino, Currents & Dialectics

"The latest chapter in Sosa's long-standing fascination with blending the folkloric and the modern, the acoustic and the electronic, An East African Journey is a cross-cultural gem of a project that discovers enlivening connections — open doors — between musical traditions." —Mel Minter, Musically Speaking

During months of quarantine this year, Omar put together a new project on the terrace of his apartment in Barcelona called KO-BCN Quartet, featuring tuba (Amaiur Gonzales), trombone (Miguel Moises), and DJ (Yohitsounds). It's a fun and altogether new direction for Omar, and we're pleased a music video of the band's song 'Moments of Joy' debuted October 16, 2020 on the Late Summer Jazz series of ARTE.TV, the wonderful European culture channel.