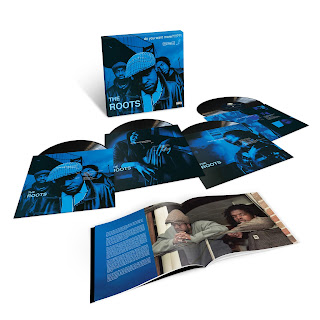 It's been 26 years since Do You Want More?!!!??!, the groundbreaking second studio album and major label-debut by The Roots. Originally released on January 17, 1995 via DGC Records, Do You Want More?!!!??!, brought The Roots' neo-soul bohemian zest to life and established them as leading figures of hip-hop-jazz. The album which peaked at #22 on Billboard's Top R&B/Hip Hop Albums chart, features their singles "Distortion To Static," "Proceed" (considered one of their most signature recordings), and the rap ballad "Silent Treatment." Led by MC Tariq "Black Thought" Trotter and drummer Ahmir "Questlove" Thompson, the Philadelphia rap crew are going back to where it began with a 3LP, 4LP and a digital deluxe collection of Do You Want More?!!!??! to be released on March 12, 2021 via Geffen/Ume.

Going back to the vault, this deluxe edition is drawn from the original recordings and features eighteen bonus tracks curated by Questlove; some of which have never been released and others that have never previously been available digitally. The 3LP deluxe vinyl edition features five bonus tracks — "Proceed II Feat. Roy Ayers", "Proceed III", "Proceed IV (AJ Shine Mix)", "Proceed V (Beatminerz Mix)," along with five remixes of "Silent Treatment" — plus a 24-page booklet featuring images taken by Mpozi Tolbert, essays by Questlove and Black Thought as well as track-by-track commentary. While the 4LP edition features all of the above plus the additional eight bonus tracks; "In Your Dreams Kid (I'm Every MC)," "The Ultimate (Original '94 Version)," "...…(dot dot dot…on & on)," "Pffat Time," "Swept Away (Original Draft)," "It's Coming," "Lazy Afternoon (Alternate Version)," and two remix versions of "Distortion To Static."

What made them stand out from other artists who were intertwining hip hop with jazzy influences and prominently using live instrumentation was the Roots' unabashed confidence with experimentation and letting the music speak for itself. As Albumism says, "While the live instrumentation is integral to their artistic success, it is not the sole attraction. Even 25 years ago, Black Thought stood out as a commanding lyricist, as did Malik B, his more publicly reserved rhyme partner. " A quarter of a century after the release of Do You Want More?!!!??, they are still considered to be one of the greatest live acts in the industry and have been named as such by Rolling Stone. They are also the house band on The Tonight Show Starring Jimmy Fallon and served in the same role on Late Night with Jimmy Fallon from 2009 to 2014.

Do You Want More?!!!??! has been considered by critics as a classic of hip-hop-jazz. Chicago Tribune music critic Greg Kot celebrated the group's ability to "mate hip-hop wordplay, funk rhythms and jazzy textures" and called the album "an impressive display of skills, intelligently arranged and performed." In 1998, the album was selected as one of The Source's 100 Best Rap Albums. On November 2, 2015, twenty years after its release, the album was certified Gold. The album stands out from The Roots' iconic discography as it showcased a pioneering live band that put their own spin on a genre that was still coming into its own.