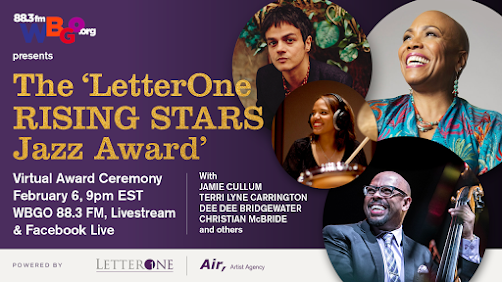 The fourth annual edition of the highly-acclaimed LetterOne 'RISING STARS' Jazz Award will announce its winners February 6th, 2021, via a global live stream broadcast on NPR's WBGO at 9 p.m. (ET).  Hosted by Jamie Cullum and featuring appearances by Dee Dee Bridgewater, Terri Lyne Carrington, Christian McBride and others as well as the winners,  the prestigious award offers one European winner and one U.S. winner the unprecedented opportunity to appear at popular Jazz festivals throughout the Europe and the U.S respectively, with all expenses covered and an accompanying dedicated promotion/marketing team.

Over 375 up-and-coming artists from Europe and over 350 from the U.S. completed submissions for this year's award which is open to all age groups, and approximately one-third of this year's applicants were women.  This year's substantial number of contestants eclipsed the amount of entries from 2019 by more than a third.

What sets the LetterOne 'RISING STARS' Jazz Award apart is the exposure and support provided to the winners - for the U.S. winner there are confirmed appearances at 10 major festivals such as Montreal, San Francisco and Washington, D.C., while the European winner receives concerts at seven festivals including Nice, Vitoria, Umbria and Jazz Open in Stuttgart - often supporting artists such as Marcus Miller or Bobby McFerrin.  The LetterOne 'RISING STARS' Jazz Award tour, agent and marketing support equates to a monetary value in excess of E75,000 or $85,000, making the prize one of the most valuable Jazz awards in the world.

Producing the Award is the award-winning Air Artist Agency, whose director Burkhard Hopper has a long-standing experience in introducing new artists. For 9 years Burkhard Hopper ran the Rising Stars concert series in Europe which – among others – introduced artists such as Diana Krall, Brad Mehldau, Benny Green, Jane Monheit, David Sanchez and Esbjörn Svensson to European audiences.

The "LetterOne 'RISING STARS' Jazz Award" is a significant event in the international jazz calendar that benefits from the sponsorship and backing of Mikhail Fridman, an international businessman, philanthropist and most importantly a huge jazz fan. Besides being a frequent visitor of Jazz festivals around the world, Fridman is also the founder of the Leopolis Jazz Festival in Lvov (UA).