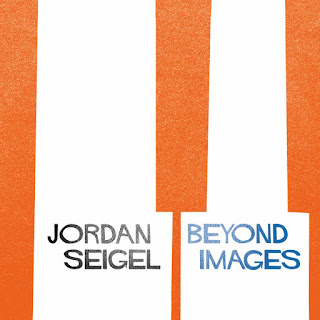 Jordan Seigel presents the vinyl reissue of Beyond Images. The debut work melds together his musical worlds together in a vibrant and eclectic collection of original pieces inspired by cinema’s greatest composers. Originally released in July 2020 and picked as one of DownBeat Magazine's 2020 Editor's Picks, Beyond Images combines the inventiveness and interplay of jazz with the transportive emotional power of the best film scores, crafting an evocative soundtrack for imaginary scenes possessing the spine-tingling suspense of a Hitchcock thriller or the heartbreaking sweep of a doomed romance.

Beyond Images features bassist Alex Boneham (Billy Childs, Sara Gazarek) and drummer Christian Euman (Jacob Collier, Kurt Elling) who use their shared experience at the Monk Institute to piece together the vigorous rhythm section. Saxophonist/flutist Natsuki Sugiyama, a frequent collaborator on Seigel’s film scores, completes the core quartet. But the diversity of the compositions flourish through Seigel’s orchestral imagination, which employs a woodwind quintet and a string quartet, vibraphone, guitar, mandolin and percussion in varying, kaleidoscopic combinations.﻿

Regarding the reissue on vinyl, Seigel notes, “After encouragement from many friends and colleagues, I decided to get “Beyond Images” pressed on vinyl. The vinyl world is relatively new to me and I ended up falling in love with it! Throughout the process, I learned so much and gained a greater appreciation of some of my favorite classic albums. One of the first LPs I played when I got my vinyl player was Cannonball Adderley’s “Somethin’ Else.” I had listened to this album dozens of time before, but it was amazing to me how rich the sonic experience felt and how I noticed subtleties in the performance I had never picked up on before. After all that goes into making an album (composing, planning, rehearsing, recording, mixing, etc), it feels so fulfilling to be able to tangibly hold and play the “Beyond Images” LP. I hope it provides a similarly gratifying experience for the listeners!”

Each of the ten compositions on Beyond Images is dedicated to and inspired by one of Seigel’s favorite film composers, a list that includes some of the medium’s most iconic names, including John Williams, Bernard Herrmann, and Thomas Newman. The pieces hint at the pianist’s inspirations in inventive and clever ways, maintaining his own unique voice while paying tribute to the great composers who have influenced him in distinctive ways. The results maintain the emotional impact and evocative colors of his movie work, conjuring rather than accompanying vivid cinematic moments. “I spend most of my time as a film composer and orchestrator, so I wanted to bring that aspect of what I do – making music for visual media – to a different audience,” explains Seigel.

Los Angeles-based composer, pianist and orchestrator Jordan Seigel possesses an expressive, original voice in a stunning variety of media. Whether scoring projects for film and television or performing and improvising on stages around the world, Seigel approaches every pursuit with the same mission in mind: to create music that truly moves people.

With his multi-faceted debut album, Beyond Images, Seigel weaves together his foremost passions with a scintillating and eclectic collection of original songs inspired by cinema’s greatest composers. His original music, in whichever medium, draws inspiration from an expansive palette of other influences as well: Stevie Wonder, Radiohead, The Beatles, Maurice Ravel, Stravinsky, and many others.

A Los Angeles native, Seigel studied at Berklee College of Music, where he garnered accolades including the Alex Ulanowski Award in Composition, the Michael Rendish Award in Film Scoring, and two Jazz Performance Awards. Seigel maintains an active role on the L.A. scene, playing with such acclaimed artists as Peter Erskine, Jeff Hamilton, Graham Dechter and the Bill Holman Big Band, and performing on such prestigious stages as Jazz at Lincoln Center, the Playboy Jazz Festival and the Beantown Jazz Festival.

In the world of visual media he’s accumulated a host of impressive credits as a composer and orchestrator for film and television, including work on such high-profile projects as Ant-Man and the Wasp, The LEGO Movie 2, and Empire. He’s performed on the scores for The Morning Show, Deadwood: The Movie, Penny Dreadful: City of Angels and is also the featured pianist for the Apple TV+ animated series Snoopy In Space, following in the footsteps of legendary pianist Vince Guaraldi.

His original music for films and television includes the underscore for the musical comedy Lucky Stiff and contributing additional music to The Twilight Zone, TURN: Washington’s Spies, and The Giver, among many others. He has also crafted arrangements for the National Symphony Orchestra’s concerts at the Kennedy Center with superstars like Common and Babyface. Seigel recently completed scoring his first studio feature film, Focus Features’ Half Brothers, which which was released to theaters in December 2020.