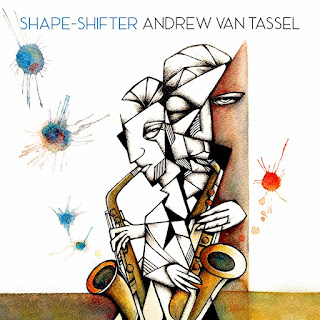 Saxophonist, composer, and educator Andrew Van Tassel draws inspiration from a broad palette of genres: bebop/hard bop, fusion, indie rock, classical music, and more. His upcoming release on Brooklyn Jazz Underground Records (BJUR 072), Shape-Shifter (his sophomore release), reflects this multifaceted approach that ultimately produces music distinctly his own, while unveiling compelling explorations with electronics in a contemporary jazz ensemble context. The pursuit of diverse interests is the cornerstone of Van Tassel’s approach to life and music, and he elaborates on this open-minded existence: “The natural world we live in constantly evolves, growing from and fading into different shapes throughout the seasons. Flowers bloom, then whither and find their way back to soil; winds blow their remnants to unknown places, where they might find a landing place to ultimately enrich soil and offer the chance for growth in a new form. Thank goodness our world doesn’t remain stagnant. It evolves. It shifts shape. Here’s to hoping we can learn to open our hearts and minds to better understand how to open ourselves up for change. Thanks for listening. We hope it takes you somewhere.”

The band Van Tassel assembled for Shape-Shifter features budding stars on the NYC jazz scene whom have collaborated with some of the most decorated stars on the scene, including Michael Mayo – voice, Lucas Hahn – piano, Wurlitzer, Alex Goodman – guitar, Rick Rosato – bass, Kush Abadey – drums and Alex Van Gils – live electronics and processing. His previous album, It’s Where You Are (Tone Rogue Records), received international praise from jazz critics and was recognized as a top 10 release by multiple publications. An original composition from the record garnered attention as a recipient of the 2017 ASCAP Herb Alpert Young Jazz Composer Award.

Andrew has performed as a leader at several of New York’s most esteemed venues, including The Jazz Gallery, ShapeShifter Lab, the Cornelia Street Café, the Bar Next Door, Rockwood Music Hall, and more. As a sideman he has performed with an array of bands across genres, including the Grammy-nominated Terraza Big Band.

He studied at some of the most prestigious music schools in the world, including the Manhattan School of Music and New England Conservatory. While earning his Master’s Degree on scholarship at NEC, he honed his skills under the tutelage of jazz luminaries Jerry Bergonzi, Donny McCaslin, John McNeil, and MacArthur Fellows Jason Moran and Miguel Zenon. Andrew now gives back to the musical community, donating his time as Associate Artistic Director of Musical Mentors Collaborative, Inc. He has also served as a guest artist and clinician at distinguished schools across the country.

As a performer and composer, he has received accolades by the likes of the American Society of Composers, Authors, and Publishers (ASCAP), the Loyola Jazz Festival, the University of North Carolina, and more.

Andrew leads a double life as a musician and a member of the Investor Relations team at the D. E. Shaw group, a global investment management and technology development firm. Experience in finance has allowed Andrew to view music through a new lens. His daily work has led to a deeper understanding of the impact of a single phrase or detail in the context of a whole work. As a result, Andrew has a renewed sense of how phrasing and details impact the stories that come across in his compositions and playing. His work in finance has also made him a better listener; he is now more cognizant of others' needs and how to better understand them. This has translated to the bandstand, enabling Andrew to home in on the needs of his bandmates during moments of spontaneous collaboration, leading to more interplay in his music.