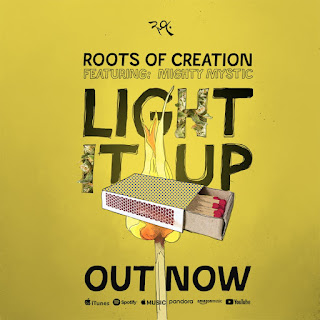 The Billboard chart topping band, Roots of Creations have created their second and most exciting collaboration yet with Jamaican reggae sensation Mighty Mystic on the new single “Light It Up.”

In current times of political upheaval, global distress, and shifting astrological tides, “Light It Up” reminds us that sometimes an anthem is all we need to reconnect to the here-and-now. Although RoC is known for diverse dynamics and sounds ranging from dub to hard rock, here the band settles into a propulsive rhythm that doesn't break for the track's 4:20 run time. Leave it to Brett Wilson's chorus “Damn, it feels good to be alive” to ring like medicine for a 2020 blight. And with Mighty Mystic providing slinky verses like “Yeah it’s a party yo/ spliff and Bacardi yo/ kick like karate yo/ sweat like a cardio” we have something fun, triumphant, and true to Reggae roots. So far new song has received critical accolades with their debuted on SiriusXM’s The Joint, and heavy rotation on Cali Roots radio.

“Light it Up” showcases the band’s collaborative spirit and diverse sound that keeps Roots Of Creation at the top of the Reggae charts, bridging both Reggae and mainstream festivals. The song features Mighty Mystic, best known as one of the leaders in the modern reggae revival. As a Billboard chart topping musician, Mighty Mystic has worked with some of the industry’s biggest and most respected artists like Lutan Fyah and reggae icon Shaggy, and today with Roots of Creation.

According to Roots Of Creation, “when going into the studio for this record our vision was to combine a roots reggae sound with electronic elements and analog dub techniques. The vibe is spacey, yet still has a driving Riddim behind it. We wanted warmth with a bite and I think that’s exactly what we ended up with.” The new song features Andy “AG” Geib from Slightly Stoopid on trumpet, Billy Kottage (formerly of Reel Big Fish) on trombone, and Alex Brander of Big D & The Kids Table on percussion. It was produced by Andrew Riordan (Dub King Productions) and Brett Wilson (Bombshelter Records), and mixed and mastered by Pete “Boardz” Peloquin (Boardz House Productions).

Roots of Creation has earned two #1 Billboard Reggae chart debuts, two #1 Relix/Jambands.com chart debuts, as well as chart debuts at NACC and FMQB. The new single “Light It Up” kicks off a series of releases coming soon, plus an EP and new album. Each release will be accompanied with limited edition merch. Check out the “Light it Up”