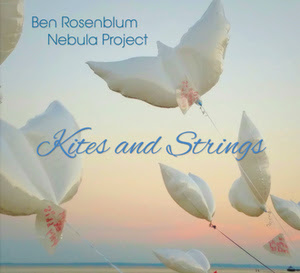 Ben Rosenblum doesn't just invite a diverse array of influences into his music. While his projects reflect his potent and deeply rooted point of view, the pianist, accordionist, composer and arranger positively thrives on a thrum of contrasting approaches. With Kites and Strings, his third album as a leader and the debut of the Ben Rosenblum Nebula Project, he's convened an exceptionally vivid cast of collaborators and provided them with a program of arrestingly beautiful pieces. Slated for release on October 16, 2020 via One Trick Dog, the album is the work of an artist who's found that his voice contains multitudes. Regularly employed by some of jazz's most revered masters, Rosenblum has already established a national profile as bandleader by logging thousands of miles on the road, playing some 100 gigs annually with his trio at clubs, theaters, schools and community centers, and relishing the opportunity to bring jazz into communities where fellow musicians rarely play.

Kites and Strings features some of the most exciting young players on the New York scene including trumpeter Wayne Tucker, guitarist Rafael Rosa, Jasper Dutz on tenor sax and bass clarinet, bassist Marty Jaffe, and drummer Ben Zweig, with vibraphonist Jake Chapman, trombonist Sam Chess and pianist Jeremy Corren expanding the sextet on several tracks. "These are all great jazz musicians who are steeped in the music's history, and they all have very different approaches to the music," he says. "My bandleader heroes often worked like that. Think of Astor Piazzolla's Tango: Zero Hour when he put together a traditional tango violinist, a rock-influenced electric guitarist, and a jazz pianist. I love seeing the way people's different styles play off of each other and combine into something beautiful and unique."

Encompassing rock and klezmer, Latin American rhythms and Bulgarian harmonies, Kites and Strings marks a major leap for Rosenblum as a composer/arranger. He gained widespread notice with his 2017 debut Instead (One Trick Dog), a confident trio session featuring drum legend Billy Hart and bass master Curtis Lundy that earned four stars from DownBeat Magazine. After holding his own with two revered improvisers he followed up in 2018 with River City (One Trick Dog), a trio with his rapidly rising contemporaries bassist Kanoa Mendenhall and drummer Ben Zweig. Kites and Strings introduces Rosenblum as a composer/arranger with a capacious palette of textures and voicings and firm command of form. The project also establishes him as the newest member of a small, extraordinary keyboard cadre made up of players equally expressive on piano and accordion, a talent-laden club that includes Gary Versace, Sam Reider, Rob Reich, and Rio de Janeiro-born Vitor Gonçalves, who's a particular source of inspiration for Rosenblum.