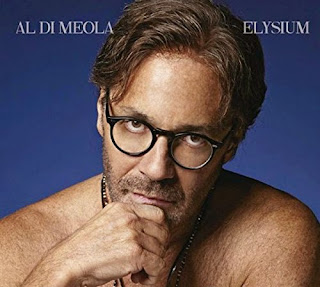 He came from the 'Land Of The Midnight Sun', sparkled on the jazz-rock stage as an 'Elegant Gypsy', came up trumps in the 'Casino' with all the right chords and melodies, and his 'Splendido Hotel' was the number one address for fusion fans around the globe. He finally achieved immortality together with John McLaughlin and Paco de Lucia on 'Friday Night In San Francisco'. For guitar lovers, the name Al Di Meola carries the same guarantee of quality that Ferrari does for sports car enthusiasts or Chateau Mouton-Rothschild for wine connoisseurs.

Al Di Meola was born in New Jersey in 1954 to an Italian-American family, and from his early days as a rising star in Chick Corea's legendary fusion combo Return To Forever right up to the present day, he has continually managed to refine his qualities: breathtakingly fast picking, skilful percussion effects the like of which had never been heard before, the effortlessness with which he can instantly switch from muscular axe-man rock to spinning gentle, romantic webs of melody. In the nineties, inspired by his love of the acoustic sounds of Latin America and the works of nuevo tango pioneer Astor Piazzolla, he made some delightful chamber music recordings with his group World Sinfonia. On more recent albums such as 'Consequence Of Chaos' (2006) and 'Pursuit Of Radical Rhapsody' (2011), all these penchants, influences and musical movements have fused into an unmistakeable sound: jazz rock meets world jazz. It's a stylistic aerobatics display, circling up to dizzying heights reminiscent of the boisterous solos Al used to play in his youth.

'Elysium' is the climax of this process so far. The artist has arrived where he always wanted to be. He himself thinks of Elysium as a 'place of perfect happiness'. A paradise where acoustic and electric components, triumphant rock and finely entwined jazz, delicate and pumping rhythms, guitars and keyboards, wide panoramas of rock and diaphanous carpets of sound come together in harmony. In this magical Elysium, everyone complements each other. Al Di Meola has brought together a five piece band with no bass. While he plays all the guitar parts himself, both acoustic and electric, including unbelievably fast and elegant riffs and effervescent rocking chords, three keyboard players and pianists provide shades of colour. This trio includes new recruit Philippe Saisse, who also contributes the composition 'La Lluvia'. The others have shared musical accomplishments with their band leader going back decades. Barry Miles has known Al since the seventies. Mario Parmisano can be heard on recordings such as 'Orange And Blue' (1994) and 'Flesh On Flesh' (2002). Two new rhythm players have now joined the team: percussionist Rhani Krija and drummer Peter Kaszas. Both of them are wide awake and always right up with the beat. ~ Amazon