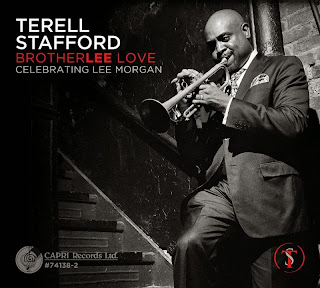 While Stafford may not be a Philadelphia native--he was born in Miami and raised in a suburb of Chicago--he's become a vocal champion of the city's storied jazz heritage. Stafford came of musical age on Philadelphia stages, mentored by local legends like Shirley Scott, Arthur Harper, Mickey Roker, and Bootsie Barnes. For the past two decades he's helped to pass that torch to the next generation through his work as Director of Jazz and Chair of Instrumental Studies at Temple University's Boyer College of Music and Dance, and he recently established the Jazz Orchestra of Philadelphia, an outstanding big band dedicated to spotlighting the city's most gifted instrumentalists and composers, past and present, which has hosted special guests including Jimmy Heath, Wynton Marsalis, Odean Pope, and Kenny Barron.

All of which makes BrotherLee Love a show of respect and celebration from one favorite son to another. "This project is about how I was embraced by this city and about a trumpet player who has always been a huge inspiration to me," Stafford says. The eight tunes contained on the album are a joyous celebration of the music and spirit of Morgan, the Philadelphia native and trumpet legend who made a profound impact on the history of jazz during his brief 33 years with his fiery virtuosity and soulful style. "Lee Morgan was a total genius," Stafford enthuses. "The trumpet was merely a vehicle to express who he was. There was rasp, there was grit, there was personality, there was sass, exactly who he was as a person was inside of his sound and that's what I loved about it."

The project stems from a single concert, a Morgan tribute at Philadelphia's Kimmel Center suggested by pianist Danilo Pérez, the venue's then Artistic Advisor for Jazz. The response to that performance, and later inclusions of some of Morgan's compositions in regular quintet sets, left no question that these takes had to be recorded. "It's impossible to play a Lee Morgan tune that people don't love," Stafford says. "There was so much joy wrapped around playing this music, and I just hope some of that comes through to the listener."
Of course, being a trumpet player paying homage to one of the instrument's most iconic masters comes with an inherent intimidation factor, but Stafford has never been one to back down from a challenge.

As a young classical trumpet student, he struggled against inadequate educational opportunities until coming under the tutelage of Rutgers professor William Fielder, Stafford then made a belated entry into the jazz world, training himself as an improviser on jam session stages under the often hostile gaze of uncharitable audiences.

So while he admits that reimagining the songs of such an influential trumpeter was daunting, Stafford nonetheless embraced the opportunity. "It was very intimidating, because when you hear these songs you hear one way to play them," he says. "But when you start playing these songs where a bar has been set so high, you better just be yourself."

Throughout the album, that individuality shines through - not just from Stafford, but from his longstanding quintet, for whom the "Brotherly Love" nickname could have been coined. Warfield has been at Stafford's side since the beginning of his plunge into jazz, standing alongside him during those early trials by fire. Barth has become a close collaborator on the bandstand and in the halls of academia, while Washington and Hall form an intensely swinging rhythm section, maintaining the vigor and muscularity of Morgan's tunes with their own unique feel.

These songs bring out truly spirited playing from the entire band: check out Stafford's tricky articulations on the sprightly opener, "Hocus Pocus," or his bluesy, muted moaning on the band's last-call read of "Candy;" lean into Warfield's sinuous lines on "Mr. Kenyatta" or be knocked back by Barth's keyboard-busting fire on the lesser-known "Yes I Can, No You Can't;" witness Hall's avalanching climax on "Stop Start" or Washington's dexterous, singing solo on "Speedball." Bask in the quintet's lush, tender side on the gorgeous ballad "Carolyn."
Finally, there's Stafford's own contribution, "Favor," which didn't start out as an homage to Morgan; it was originally commissioned by Philadelphia chamber ensemble Network for New Music as part of a tribute concert to contemporary classical composer John Harbison. But the piece earns its place alongside these memorable Morgan compositions by virtue of its easy swing, its loose but spirited vibe, and its lithe, blues-steeped soul. It's also thematically relevant as Stafford meant the piece as a way of giving thanks, he explains, "to have the gift to be able to do this record and be able to touch people with music. That's what that song represents, and that's what I put into this whole project."

Although he didn't come to jazz until his early 20s, Stafford was a quick study and was enlisted during his college years to play with saxophonist Bobby Watson's Horizon. From there he joined McCoy Tyner's Latin All-Star Band alongside such greats as trombonist Steve Turre, flutist Dave Valentin, and percussionist Jerry Gonzalez. In addition to his work as a leader he's continued to be an in-demand sideman, including considerable stints with the Clayton Brothers, Matt Wilson's Arts & Crafts, and the Vanguard Jazz Orchestra.

The son of a teacher, education has always played a role in Stafford's life. He's served as Director of Jazz Studies at Temple University for the past twenty years, late integrating oversight of the school's classical department as Chair of Instrumental Studies. In addition, he's spent time as a clinician at the Vail Foundation in Colorado and Jazz at Lincoln Center's Essentially Ellington program.