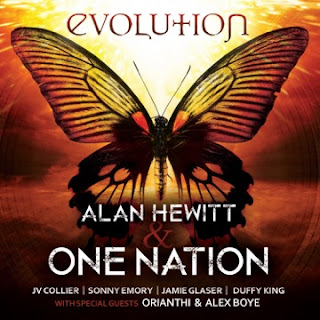 What happens when you put world class musicians together, stir in some jazz, rock, prog and a whole lot of inspiration? You get Alan Hewitt & One Nation… a fusion of great songs combined with great musicians and great performances influenced by their predecessors, Return to Forever, Weather Report and Mahavishnu Orchestra.

“This music has no boundaries nor relies on the current norm. It’s inspired, energetic, artful, melodic and edgy! I wanted to return to the music that I listened to and loved so much when I was growing up, which was fusion- and put my own stamp on it! ” says Hewitt.

Hewitt just finished up a U.S. and will be embarking on the European leg of the tour in June, with The Moody Blues performing at legendary venues such as the Greek Theatre in Los Angeles, the majestic Red Rocks Amphitheatre in Denver and The Apollo in London. Hewitt is also being showcased on “Justin Hayward’s Spirits…Live at Buckhead” DVD airing nationwide on PBS which has already charted at #2 on the Billboard Charts. You can view Alan’s press coverage here.

Alan Hewitt has made his living painting musical tapestries about the lives of others.  Hewitt began his career performing in the club scene but quickly graduated to the production room, where he had the honor of working as Co-Producer alongside Maurice White of Earth Wind and Fire (EWF) for over half a decade with EWF's Greatest Hits album going platinum in 2000. However, it was co-writing and piano/B-3 contributions on the platinum record Cherry Pie with Warrant that would solidify Hewitt as a monster musical talent capable of crossing genres.

Hewitt's list of record production credits as both a Producer and recording artist spans across various major labels and genres with over 12 million records sold. A first call composer for a long list of major film and television productions, Hewitt's film & television credits include National Lampoon's Van Wilder, Bridget Jones: The Edge of Reason, Survivor, MTV, Access Hollywood, Tom Holland's Twisted Tales and is a favored composer for the Oprah Winfrey Show (including Oprah's Big Give). The list of accolades from the industry includes a "The Golden Planet Award", “Best Score at New York International Film Fest” and the "ESPY Award for Excellence".