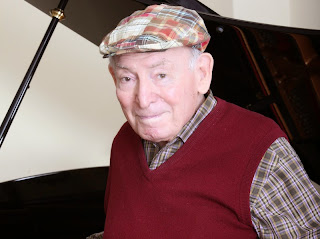 George Wein, music impresario, NEA Jazz Master and Grammy Award winner, will receive an Honorary Doctorate at Boston University's (BU) 142nd Commencement on Sunday, May 17. The founder of the Newport Jazz Festival® (1954), Newport Folk Festival® (1959), New Orleans Jazz & Heritage Festival™ (1970) and countless other events around the world, Wein forever changed how music is presented and, at 89, continues to build new audiences for emerging and established artists at the iconic Rhode Island events.

Journalist and TV personality Meredith Viera will deliver Boston University's Commencement  Address and Cornell William Brooks, president of the NAACP, will deliver the Baccalaureate Address. Both will receive honorary degrees along with Wein and Allen and Kelli Questrom, entrepreneurs, philanthropists and University benefactors. The graduation ceremony, including the commencement address and awarding of honorary degrees, can be watched via live webcast at www.bu.edu or listened to on Boston radio station WBUR 90.9FM/www.wbur.org at 1:00 pm on Sunday.

Wein enrolled in premed courses at BU to please his father, Barnet Wein, who graduated from the university with a medical degree in 1920. However, the younger Wein, whose heart was in jazz and performing, soon realized that it was "a mistake" and graduated in 1950 with a degree in history.  Shortly after graduation, he opened a jazz club, Storyville, in Boston's Copley Square Hotel. Already an accomplished pianist, Wein performed in his club, and quickly turned it into a music Mecca for some of the world's greatest musicians.

George Wein's years at BU ended up playing a major role in his life in music.

Jazz fan Donald Born, a College of Arts & Sciences professor of English, was a Storyville regular, and although Wein hadn't taken a course with him, they became great friends. Wein's career as a music-festival organizer had its origins at the club one night in 1953, when Born brought wealthy Newport socialite Elaine Lorillard there. Lorillard, who had been auditing one of Born's classes, was looking for ways to liven up Newport's boring summers with some jazz. Born thought Wein might be able to help. The rest is music history.

"I had a course in the theory of aesthetics that has helped me all my life," he says. "It just caused me to think about what the standards are for beauty and for love, on a very aesthetic level, and as I've traveled around the world, looking at museums, looking at architecture, that course gave me more enjoyment of life."

In addition to his life in jazz and folk music, Wein has a long history of involvement with philanthropy and the arts, including the establishment of the Joyce and George Wein Chair of African American Studies at Boston University, the Alexander Family Endowed Scholarship Fund at Simmons College and an annual artist prize given through the Studio Museum in Harlem in honor of his late wife, Joyce Alexander Wein.

George Wein founded the Newport Festivals Foundation™ in 2010 to enhance and continue the legacies of the famed Newport Jazz Festival and Newport Folk Festival. Under the auspices of the Foundation, the Festivals present performers who respect and honor jazz and folk music traditions, and at the same time reflect the changes in today's musical trends. Through the establishment of partnerships with local high schools, colleges/universities and community organizations, the Foundation offers programs to educate young people about jazz and folk music as presented at the annual festivals.