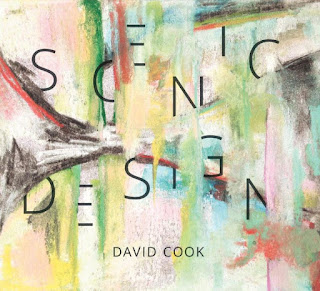 Pianist and composer David Cook possesses the ability to compose music that allows his massive talent to shine through unimpeded, creating a bond with the listener with every note.  On May 26, Cook follows up his debut recording, Pathway (produced by Bruce Barth and released on Brooklyn Jazz Underground Records) with the release of Scenic Design, a compelling set of original music, and a brilliant duo version of Taylor Swift's "Safe and Sound" (with trumpeter David Smith), produced by Ben Wendel, and featuring his quintet of David Smith - trumpet, Ben Wendel - sax, Matt Clohesy - bass, Kendrick Scott - drums, and special guest Shayna Steele on vocals (on "I Know You Know").  In addition to leading his own bands, Cook is a first-call artist in multiple genres, working as the long time music director/pianist for seven-time Grammy Award winner, Taylor Swift, and with such notable musicians as Lizz Wright, Donny McCaslin, the late Lew Soloff, John Ellis, Nir Felder, Sunny Jain (of Red Baraat), Alan Ferber, Michael Blanco, Greg Howe, and pop artists N-Sync (during the heyday of their career), Justin Timberlake, Natasha Bedingfield, and many more.

"I'm really fortunate to have been able to record Scenic Design with Ben, Dave, Matt and Kendrick. These are 4 of my favorite musicians, all total pros that have strong and clear voices on their respective instruments . . . really all I had to do was write the music and get out of the way. The goal was for a true collective sound, and I hope this album has achieved it," said Cook.

The idea of doing a quintet recording was both daunting and exciting for Cook. He explains, "I knew that I wanted to spread the melodies out past the piano on this record, but in which direction? Is it possible to say something unique and true to the history of this music at the same time? As a starting point, I picked three of my favorite quintets - Woody Shaw with Dexter Gordon, Fred Hersch and Kneebody - and tried to write music that might exist in the middle of a triangular plain with those three points." Producer/saxophonist Ben Wendel (Kneebody) was instrumental in making this happen, as he "had so many great arrangement and orchestrational ideas; the tunes really came together once he put his ears on them," said Cook.

Highlights on Scenic Design include, "Flower + Hope", written for a dear friend of Cook's who is facing an uphill battle with his health. "He told me what he was up against (with his typical Viking strength and wit) while standing on a street corner in Los Angeles, and looking in both directions was Flower Street and Hope Street. The juxtaposition of fighting for life in this world but spiritually being fine with any outcome was a powerful moment," explained Cook. "80s TV theme song": "I wanted to write a Keith Jarrett tune circa, 'Somewhere Before' or 'Life Between the Exit Signs', and what came out sounded more like an 80s TV theme song, so there you go," said Cook. "I Know You Know" is for Cook's daughter Caia, written by the pianist and his wife, vocalist Shayna Steele. Cook describes the inspiration behind this beautiful composition, "every parent out there knows the feeling of stepping back, taking a look at your child and being overcome with emotion that you're responsible for someone this beautiful and precious. We wanted to put music and lyrics to that moment." "'Scenic Design' is my favorite tune on the record, mostly because it allows everyone to 'paint' however they'd like. Kendrick Scott ate this one up, although that goes for every tune on the session."

In addition to his original compositions, Cook and Wendel also arranged Cook's favorite Taylor Swift song, "Safe & Sound," Cook has been working with Taylor for the last five years and has witnessed up close how serious she is about writing, recording and performing music, while simultaneously living her life in the public eye. Scenic Design closes with the contemplative tunes, "Midwestern" and "Still", one looking back and another dealing with the present and future. "'Midwestern' is a tribute to the beauty of the part of the country where I grew up, trying to carry some of that vibe with me wherever I go," David Cook.