Bassist LORIN COHEN To Release His Debut Recording as a Leader, HOME 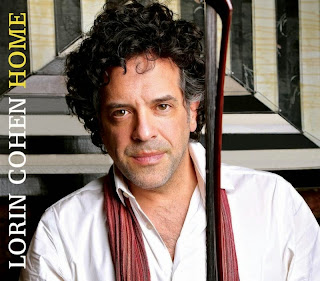 Bassist and composer Lorin Cohen has been called "superb" by the Chicago Sun-Times, "ultra-versatile" and "poetic" by the esteemed Howard Reich of The Chicago Tribune, who described his playing as being fueled by "relentless invention". A bassist and composer of profound imagination, soulfulness and fire, Cohen's joyful musical spirit and swinging beat have delighted audiences around the globe. After many years of high profile sideman work, including long stints with the likes of Monty Alexander, Joe Locke and Ryan Cohan (including world tours and multiple recordings), and sharing the stage with numerous jazz luminaries, Cohen proudly releases his debut CD as a leader, Home, available on Origin Records on May 19, 2015. Cohen will celebrate the recording with a one-night CD release fete on May 21 at Birdland in NYC, and two nights at The Green Mill in Chicago, June 5 & 6. Home features a stellar international group of players, and the completely unique front-line of vibes, steel pan and harmonica: legendary NYC vibraphonist Joe Locke, Virgin Islands steel pan virtuoso Victor Provost, the French harmonica player Yvonnick Prene, Chicago pianist Ryan Cohan, veteran NYC drummer Donald Edwards and Colombian percussionist Samuel Torres.

The musical map and musical DNA of Home encompasses three locales which are all equally near and dear to the bassist/composer's heart; Cohen's hometown of Chicago, his current home of New York City, and the vast Caribbean, which has had a profound influence on his music for many years. Cohen elaborated, "I'm rooted in Chicago, it's where I grew up and came of age as a musician. The Chicago esthetic is about making soulful music that feels good. Making sure this 'deep-dish' style was front and center in the music on Home was the first order of business. I currently reside in New York City and the edge, attitude and drive of Gotham inform 'Crossings,' 'Anthem,' 'The Hero's Journey,' and 'Finding Center'. As a kid on family vacations to South Florida, I was mesmerized by our hotel's poolside reggae band. Coming from the cold and gray landscape of my home in the Midwest, they transmitted a languid sun-drenched vibration that could last many lifetimes. When I look back on myself reveling in that groove, I see it as a foreshadowing of musical experiences to come. I soon became captivated by the rich musical palette of the Caribbean; from Cuba to Jamaica, Trinidad, and all points in between. Then, from 2007-2011 I toured widely with pianist Monty Alexander, whose music shines with the light of the Greater Antilles. You can hear these Caribbean instincts on 'Saudade,' 'Always in My Heart' and 'A Brighter Day.'" One of the most profoundly beautiful and revealing compositions on Home is "The Sweetest Soul", "dedicated to the memory of my wonderful father. I think it speaks for itself," said Cohen.

Cohen chose mallet instruments as the main voices for his compositions because of his deep love of rhythm. For Cohen, it's the most important thing in music and why he started playing the bass in the first place - he simply wanted to make people dance! This album serves as Cohen's heartfelt tribute to the home he grew up in and the family and friends that gave that home it's glow. It also showcases Cohen's global ear as well as his love of rhythm-the heartbeat of the world and the foundation and "Home" of all music. Ultimately, this music has also been his way back home after a series of family tragedies, and it is the artist's hope that, on some level, it connects with the listener emotionally, inspiring reflection, offering solace, and ultimately creating joy.

A thrill to watch and sublime to hear, Cohen is best known for his work with Monty Alexander, Joe Locke, Guggenheim Fellow Ryan Cohan, and the acclaimed hip-hop-meets-jazz ensemble, Vertikal. While he possesses a vast array of expressive devices, the focus of his playing is always on generating a broad and propulsive beat. This groove consciousness has taken him around the world, allowing him to share his talents with audiences throughout North and South America, Europe, Asia, Africa, the Middle East and the Caribbean.

Lorin was raised outside of Chicago in Lincolnwood, Illinois in an artistically rich home. His mother Muriel, a music teacher, played guitar, piano, and violin. Beginning on alto saxophone in fourth grade, Lorin picked up the bass guitar at 14 so that he could jam with his guitar-playing older brother Elliott and his cousin, the pianist Ryan Cohan. Influenced by his brother's love of Chicago blues and classic rock, Lorin eventually discovered Jaco Pastorious, Chick Corea, and ultimately, straight ahead jazz. Taking up the acoustic bass at the age of 25, Lorin studied with noted Chicago bassist Larry Gray and Joe Guastefeste (principal bassist with the Chicago Symphony). In 1998, Lorin received the Blue Note Records Scholarship at the Skidmore Jazz Workshop.

In 2005, Cohen began touring the world with jazz icon Monty Alexander. He plays on the pianist's two recordings for the Chesky label, The Good Life: Monty Alexander Plays the Songs of Tony Bennett and Calypso Blues: The Songs of Nat King Cole. Lorin's longtime collaboration with 2008 Guggenheim Fellow Ryan Cohan has included tours of the U.S., Canada, Europe, Russia and Africa. He also appears on four recordings with the composer/pianist: Here and Now (Sirrocco/2000), One Sky (Motema/2007), Another Look (Motema/2010) and The River (Motema/2013).

Lorin has toured throughout North America and Japan with Joe Locke, widely recognized as the premier vibraphonist of his generation. He has shared his talents with the vibraphonist on the New York stages of Jazz at the Kitano and Dizzy's Club Coca-Cola. They have recorded three albums together: When You Wish Upon a Star (Motema/2013), under Locke's name, Ryan Cohan's Another Look, and Cohen's current, debut album, Home (Origin/May 19, 2015). Cohen has spanned the globe to foster cultural exchange through music. As a "Jazz Ambassador" for the U.S. Department of State and the Kennedy Center, Cohen toured Southeast Asia in 2004. On that tour, he performed and taught in Vietnam, Thailand, Indonesia, Pakistan, the Philippines and Bangladesh. The Yamaha Musical Instrument Corporation chose the bassist to "road test" their "Silent Bass" for the tour.

He spent February of 2008 with the Ryan Cohan Quartet on a five-country tour of Africa and the Middle East. This was part of "The Rhythm Road: American Music Abroad" program, a partnership with the U.S. State Department and Jazz at Lincoln Center. Cohen and his band mates were selected by a panel headed by Wynton Marsalis to perform and conduct workshops throughout Rwanda, the Democratic Republic of Congo, Uganda, Zimbabwe, and Jordan. Based on the success of that tour, the same group was selected for a second time to visit Russia, Belarus, and the Ukraine in February of 2009.

Cohen moved to NYC from Chicago in 2012. Since his arrival in New York, Cohen has shared the stage with numerous jazz luminaries, including: Joe Locke, Geoffrey Keezer, Victor Lewis, Stefon Harris, Michael Weiss, Houston Person, Bucky Pizzarelli, Cyrille Aimee, Jon Davis, Jeremy Pelt, Jim Ridl, Paul Bollenback, Roni Ben-Hur, and Clarence Penn. Cohen's musical experiences span far beyond the world of jazz. He has worked as a substitute bassist for the Chicago run of Jersey Boys (2008-2010) and the Broadway production of Motown: The Musical. His work as a bass guitarist, producer and songwriter is featured on the eponymous album by the R&B/Hip-hop/Jazz group Vertikal. Cohen is currently pursuing his Masters in Music at The Aaron Copland School of Music at Queens College.