Ayn Inserto Releases Home Away From Home, a Collaboration With Colours Jazz Orchestra, One of Italy's Most Formidable Big Bands 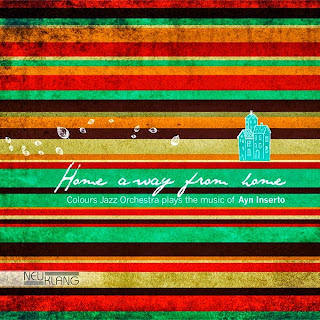 This album was born with an alluring invitation. Several years after seeing a memorable performance by the Ayn Inserto Jazz Orchestra with tenor sax great George Garzone and legendary trombonist/ composer Bob Brookmeyer at the Berklee Performance Center, Italian trombonist Massimo Morganti arranged for Inserto to come to Italy for a series of workshops with his formidable Colours Jazz Orchestra. Inserto quickly struck up a close bond with the band, returned the following year for a series of gigs, and ended up arranging a consistently inspired set of material for the world class ensemble, music documented on Home Away From Home, slated for release in the US by the German label Neuklang Records on June 9, 2015.

An associate professor of jazz composition at Berklee College of Music, she's the leader of the acclaimed Ayn Inserto Jazz Orchestra, which features some of Boston's most potent improvisers. As a protégé of the late great Bob Brookmeyer, who's featured on her 2006 debut album Clairvoyance, Inserto has won numerous awards and commissions while producing a gloriously inventive body of work. Full of dynamic movement, striking voicings and lush harmonies, Inserto's imaginative writing puts her at the forefront of the contemporary orchestral jazz scene.

Inserto's third release, Home Away From Home, introduces a vivid and varied collection of pieces that she's never recorded before. Her familiarity with Colours is evident throughout. The album opens with her "You're Leaving? But I Just Got Here," dedicated to former Berklee Jazz Composition Chair, Ken Pullig, which proceeds from a cheeky dialogue between drummer Massimo Manzi and soprano saxophonist Simone La Maida into a drum-directed band confab and deftly interwoven soprano/trumpet conversation. The Harvard Jazz Band commissioned her sensuous but abstract recomposition of Joe Henderson's standard "Recorda Me," which hints at the original melody while setting it in a new alluring harmonic framework.

In many ways, Inserto provided a good deal of the inspiration for the creation of Colours. Morganti was studying at Berklee for a year when he caught the performance by Inserto's orchestra with special guests Garzone and Brookmeyer. He decided he wanted to create something similar back home in Ancona, a central Italian port on the Adriatic coast.

Founded in 2002, Colours draws on some of the finest players on Italy's vibrant jazz scene
and has collaborated with jazz stars like Brookmeyer, Ryan Truesdell, Bob Mintzer, Maria Schneider, and Kenny Wheeler (who's featured on the band's critically hailed 2009 debut album Nineteen Plus One).

"Massimo writes for Colours, but he mainly tries to have guest artists come in for the orchestra to play their music," Inserto says. "It's a great band, a modern big band that's always looking for interesting material."

Born in Singapore, Inserto was 14 when her family relocated to California, and within a year had settled in the San Francisco Bay Area's East Bay, where she was well prepared to take advantage of the region's extensive jazz educational resources. Inserto had started taking piano lessons as a child, and jumped into music at her Catholic church.

"I was very active in the church choir, and they this one band that had a little more modern sound," Inserto recalls. "I was playing the organ, and there was lot of improvising that would go on before the service started. A lot of our music only had lead sheets, and I'd make up stuff to go with them."

Introduced to jazz via the Manhattan Transfer, she learned to read chords from a book of Disney tunes, and soon started substituting her own chord choices to make the songs sound more interesting. By the time she started Clayton Valley High School in the East Bay city of Concord, Inserto was obsessed with music, playing piano in various school ensembles, including the jazz band. She discovered Bill Evans, McCoy Tyner and other piano giants, while continuing to study classical piano. She was also an avid member of the award-winning Blue Devils Drum and Bugle Corps, playing mallet percussion. Inserto's jazz education took a quantum leap when she attended a weeklong Berklee camp held in Los Angeles "where I learned voicings," she says. "Around that time I also started writing for the school band and the marching band. I got hired to write for the Blue Devils "B" Corps, writing all these mallet percussion ensemble pieces."

She attended Los Medanos College's respected jazz program for several years and then transferred to Cal State Hayward (now Cal State East Bay), where she thrived under the tutelage of trombonist/arranger Dave Eshelman, who has mentored several generations of exceptional Bay Area jazz musicians. He recorded several of her pieces with the CSUH Big Band. Encouraged to apply to New England Conservatory by saxophonist and NEC professor Allan Chase, who's now a member of her Jazz Orchestra, Inserto was drawn to NEC by the presence of Brookmeyer. "I studied two full years with him," she says. "I was writing from a piano player's point of view, and he got me into more melodic writing, developing these long lines. After NEC I continued to study with him and he really took me on as a mentor."

While Brookmeyer's influence is evident, Inserto has honed an independent musical identity writing and arranging for her orchestra, as well as numerous other ensembles that have commissioned her. She released her second album featuring the band and special guest George Garzone, Muse, in 2008, cementing her reputation as a composer and arranger of exceptional acuity. She has no plans of giving up the Ayn Inserto Jazz Orchestra, but after her collaboration with Colours it couldn't be clearer why Italy is truly a home away from home.

www.ayninserto.com
Posted by Jazz Chill at 8:30 AM