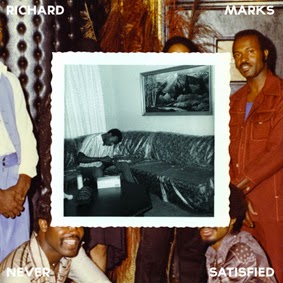 Seven years in the making, Never Satisfied is our collection of legendary soul and funk singles by Atlanta Guitarist/Singer/Songwriter Richard Marks. This 21 track anthology follows Marks’ stylistic development, from his earliest work for the legendary Tuska label, from 1968 until approximately 1972, through his more mature releases on the Shout label and smaller regional labels like Note, Free Spirit and RSC. It also includes two tracks never released in any form, found on reels Marks had maintained in his Atlanta home.

Marks’ story is that on an unsung soul and funk hero; a guitarist, vocalist and songwriter whose number was in Al Green’s, Barry White’s and Eddie Kendricks’ rolodexes, but whose talents have only been heard in sporadic bursts since his 45s were released and disappeared into Atlanta’s urban expanse.

This is the story of a father and husband who managed to keep his family together as he gigged the third shift six nights a week. The story of a man who wished for more and whose talent is overdue for reassessment. He and his music are unknown to the majority, but to an obsessive minority, he is a lightning rod, that singular point at which numerous Southern soul and funk musicians converged and exploded, spreading wondrous music in all directions. Marks’ impeccable run of 7″ singles, released largely on tiny, local labels, are the stuff of legend, and are hen’s-teeth-rare.

Marks died of cancer in May of 2006, never having issued an album, either in the ’60s and ’70s, when many of his peers were able to find a way to issue an LP, or in anthology form in his later years. He never granted an interview. Given the caliber of his recordings and the near complete lack of information available about him before the issue of this anthology, Marks stands out as the most mysterious talent to originate from Atlanta, a city that birthed no shortage of genius, from acclaimed worldwide (the Mighty Hannibal), obscure yet celebrated (Lee Moses) and local, but well documented (Tommy Stewart).

The release comes as a 56 page, 8.5 x 5.5″ saddle stitched book with the CD inserted into back sleeve. The book contains extensive essays on Marks’ career and is full of never-before-seen photos and ephemera from this crucial Southern soul and funk epoch.