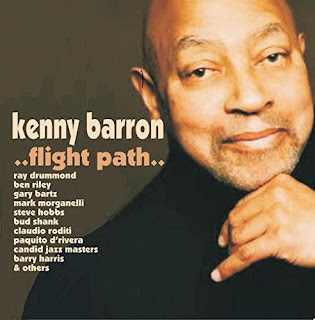 
The cultured piano style of Kenny Barron has graced many albums in the last half century. He is an easy swinger, deeply admired for his nonpareil musicianship and innate sensitivity to the needs of his musical companions of the moment. Born in 1943 he was gigging with Philly Joe Jones at sixteen and soon playing in a band with his tenor saxophonist brother Bill. In 1962 he was hired by Dizzy Gillespie and the five year stint he had with Dizzy established him firmly on the jazz scene throughout the world. This celebration of Kenny's fifty years on that scene is marked by this program of highlights from his Candid recordings in a variety of settings. Amongst his companions are vibes star Steve Hobbs, saxophonists Bud Shank, Gary Bartz, Donald Harrison, Paquito d'Rivera and Ricky Ford as well as trumpeters Claudio Roditi, Mark Morganelli and others. Together with several of Kenny's fine original compositions, the piano duets with Barry Harris and John Hicks on show here add spice to this truly tasty offering. ~ Amazon 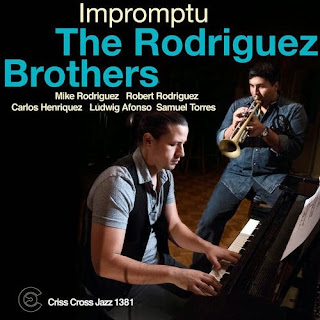 A working unit since 2002, The Rodriguez Brothers - trumpeter Michael Rodriguez (Reverence - CRC 1356) and pianist Robert Rodriguez - present their kinetic, masterfully rendered concept of 'Jazz Latin, 'incorporating traditional and modern Afro-Cuban, Brazilian, bolero and hardcore jazz flavors. The brothers, each in their mid-thirties, are virtuoso storytellers on their respective instruments, as are their generational peer group bandmates Carlos Henriquez (the bassist with the Jazz at Lincoln Center Orchestra since the early '00s after several years with Gonzalo Rubalcaba), Cuban traps drummer Ludwig Afonso, and the eminent Columbian-born percussionist Samuel Torres. ~ Amazon

Time Flies . . . is the twelfth release by Pearl Django in a little over 20 years of performing. For the period of the past four CDs the group has moved away for Django style covers and has exploited the composing skills of the band members. On this CD you will find nine PD originals and a beautiful cover version of Black Orpheus by Luiz Bonfa. While there is still strong evidence o for the influence of Django Reinhardt, with titles, Django Bop, Djangolatry and Something Borrowed, there are a few compositions which, push the boundaries of what may be considered Gypsy jazz or Hot Club Swing. The compositions are quite good, quite good indeed. ~ Amazon