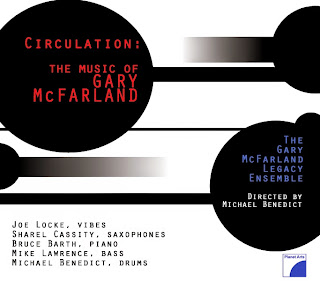 The Gary McFarland Legacy Ensemble is dedicated to the preservation of the music of composer, arranger, and vibraphonist Gary McFarland. McFarland was a significant force in the jazz world in the 1960s. He was considered an “adult prodigy” by former Downbeat magazine editor Gene Lees as Gary did not start any formal studies until he was in his late twenties. After winning a Downbeat scholarship to the Berklee School of Music in 1959, McFarland spent just one semester of study there before moving to New York City.

Through his connection with trombonist/composer Bob Brookmeyer, McFarland wrote his first professional arrangements for Gerry Mulligan’s Concert Jazz Band. The rest, as they say, was history. McFarland would go on to be one of the most important jazz forces of the 1960’s with his compositions, arrangements, recordings, and film and stage scores. He was also a prolific producer and part owner of the SKYE record label along with Cal Tjader and Gabor Szabo. McFarland was also one of the first jazz musicians to include pop and rock material in his recordings and performances. His recording, America the Beautiful, combined elements of jazz, rock and orchestral writing that would prove to be one of the most seminal works of the 1960s. McFarland died in 1971 just after his 38th birthday. His career lasted just a little over ten years but his music is timeless.

Percussionist Michael Benedict has studied, performed and recorded McFarland’s music ever since meeting Gail McFarland, Gary’s widow, in 1979. Michael and Gail were married in 1981 for twenty-five years until Gail’s death in 2007. Michael and his stepdaughter, Kerry McFarland, continue to promote Gary’s music to this day.

This first recording focuses on McFarland’s most recorded material as well as more obscure, unrecorded selections.The recording features Bruce Barth on piano, Joe Locke on vibes, Sharel Cassity on saxophones, Mike Lawrence on bass and Michael Benedict on drums. The music is arranged by Bruce Barth. The recording is produced by Thomas Bellino and issued on the Planet Arts Recordings label.